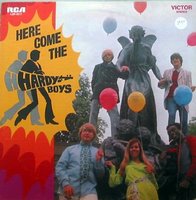 I was a voracious reader as a child. I read every single Hardy Boys novel from the original series. But I had no idea that there was a Saturday morning cartoon Hardy Boys series that ran from 1969 to 1971 until I saw Here Come the Hardy Boys with its mod cover art sitting in the bins of a dusty record store in Providence, RI. From what I can gather, the series was absolutely horrible with sub-Scooby Doo animation and storylines courtesy of budget cartoon powerhouse Filmation studios.

The premise behind the series was predictably absurd; the boys used a rock band as cover to investigate mysteries. The show's producers also made the strange decision to also create a "real" band to perform the music and promote the albums. So what do you think the odds are that the music made for this cut-rate, misguided kiddie series is any good? Pretty slim right? Well, much to my surprise, the music is much more than just competent bubblegum pop--it's terrific bubblegum pop with a pronounced punk edge. Let's put it like this, if it came to a fight between the Archies and The Hardy Boys, The Archies would get their lunch handed to them. 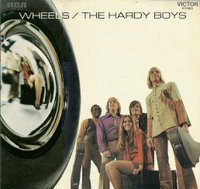 The music was produced for RCA records by Dunwich Productions, who were responsible for bringing the music of The Shadows of Knight, HP Lovecraft, The American Breed, The Luv'd Ones, The Cryin' Shames, and others to the public. Given the Dunwich connection, perhaps it's not so surprising the music of the Hardy Boys rocked. (BTW, Dunwich eventually morphed into Wooden Nickel, which was the first label to bring the music of Styx to the world's attention.)

"Sink or Swim" and "Those Country Girls" come from the first Hardy Boys album. A lot of retro-garage bands from the 80s would have gladly traded their vintage Voxx guitars and fuzzboxes for two original songs this good. I am definitely on the lookout for the second Hardy Boys album, Wheels, which has even better cover art and a song called "I Hear The Grass Singin'." (I’m always amazed at the way blatant drug references got snuck into Saturday morning kiddie shows in the 60s and 70s, H. R. Pufnstuf being only the most blatant example.)
Posted by Pete Bilderback at 7:57 AM

I'm pretty sure I saw some of these cartoons as a kid. I seem to remember a theme song that went something like "Oh boy, here come the Hardys/Oh boy, we're having a party".

This is why there was no room for calculus in my head. I stand by my decision.

Dan, you remember the theme song pretty well, it's the lead off track on the album and that's pretty much how it goes. As I think on it more, somewhere lost in my network of Saturday morning cartoon memories, I think I do vaguely remember this series. It was probably shown in repeats after 1971, because there is no way I could remember it from that far back (I would have been two).