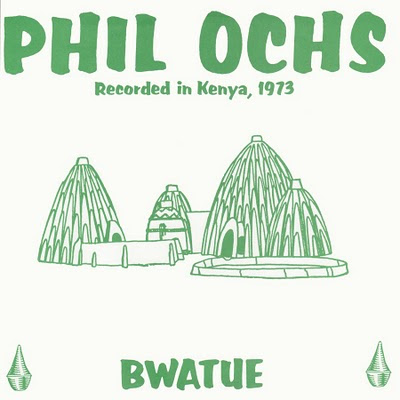 I have always been attracted to doomed and tragic figures, and perhaps no one was more doomed or tragic than Phil Ochs. Crushed by the weight of collapsing idealism in the late-sixties, Ochs committed suicide in 1976. He left behind an uneven, but extraordinary body of work. Even his most topical songs tend to hold up well today because of the undeniable passion and humanity he brings to them. Sadly, many of his protest songs are all too topical today; a few judicious word changes to "Here's To The State of Richard Nixon" could describe our current imperial presidency. Had Phil Ochs survived to see the Bush Presidency, he no doubt would have hung himself all over again.

Here is one of the most rare items in the Ochs discography, "Bwtue" the A-side of a single he recorded while on tour in Kenya in 1973. To my knowledge, the two songs he recorded for this single were the last studio recordings of Ochs' career. By 1973 Ochs had already fallen into a state of deep depression, and was suffering from a severe case of writer's block.

The 1973 African trip would have tragic implications for Ochs' life and career. While walking on the beach at night, he was robbed and strangled; as a result his vocal chords were permanently damaged. Ochs believed agents of the U.S. government orchestrated the attack. I cannot say if this was the case or not, but it should be pointed out that Ochs was extremely paranoid at this point in his life. It should also be pointed out that the FBI had long had him under surveillance and considered him a threat.

I suppose you could say that Ochs was doing "World Music" long before Peter Gabriel, Talking Heads or Paul Simon started incorporating elements from African music into their own compositions, but I think that is giving him too much credit. Listening to this song it is hard to figure out what the heck Ochs is even doing on it. Perhaps if he had not been so depressed he might have returned to the States to create some kind of genuine World Music fusion, but that was not to be.

Posted by Pete Bilderback at 9:49 AM

Another 'FBI threat' Hunter S. Thompson said "Just because you're paranoid doesn't mean they're not out to get you."

The FBI supposedly had 410 pages of documents on Phil Ochs when he died in 1976. The John Lennon files are massive as well and are well-documented. What was the FBI's purpose for all this? Does having Big Brother watching make you rethink your actions and behavior? Maybe the answer is closer than we think. Now that in 2006 we all find ourselves subjects of government surveillance maybe we need to look no further than our own lives. What real effect does surveillance have on it's subjects' lives? Well if Lennon, Ochs and Thompson were still alive we could simply ask them. I guess we'll just have to find out ourselves.

I think there is no way to know what really happened to Ochs, although I would not rule out some sort of secret FBI action. Maybe more documents will emerge in the future that will shed some light on this, but I tend to doubt it.

As for the situation today, I couldn't agree more. 9/11 has been used to justify a series of civil liberties abuses most Americans never would have stood for in the past, and our democracy itself is at risk as a result.

I can't believe the FBI would have made it a priority to rub out the singer of Kansas City Bomber...

Africa would be in the CIA's domain as opposed to the FBI. Despite the domestic FBI surveillance of Ochs, however, the most likely explanation is that he was simply mugged in Africa. The same thing happened to Paul McCartney while recording Band on the Run in Lagos; he lost his demo tapes, whereas Ochs ended up losing the upper end of his singing range.

Nice to see this post still getting comments after all this time.

To Peter Brown--thanks for stopping by. I agree that a simple mugging is by far the most likely explanation for what happened to Ochs.

To anonymous--good point about Joni Mitchell.

Imperialist presidency....well chosen words as well for our current administration

Yes, jumpthejim, I'm sure Ochs is turning over in his grave over the prospect of Americans getting universal health coverage.