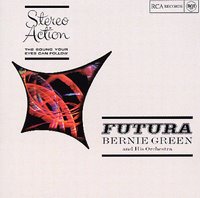 Back in 1959 Bernie Green and his Orchestra dared to imagine what popular music would sound like in the year 1970. Not surprisingly this sounds nothing like "Green Eyed Lady" by Sugarloaf, or anything else that was popular in 1970. But Green needn't have felt too badly about being off the mark in his projections, because people are notoriously bad about predicting things to come. If predictions in the popular press at the time had come to pass, machines would be doing all our work today, and the few of us who still actually worked would be doing so on the moon.

Bernie Green did a lot of this stereo-demo/lounge music with a great amount of humor, including a parody of stereo-demo records for Mad Magazine. The liner notes describe one song as follows: "If you've got stereo, you'll hear the drummer actually move across the bandstand (to kill the chimes player). Otherwise, you'll just have to be satisfied with a monaural account of the bloodshed!"
Posted by Pete Bilderback at 1:00 PM