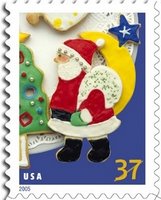 The Jingle Cats first album, 1994's Meowy Christmas was a promising, if uneven debut. If nothing else, the band proved they had honed their craft during years of playing the Madison Wisconsin college circuit. When their version of "Silent Night" was a surprise smash, the album quickly went platinum mostly on the strength of that single. Nevertheless, most critics dismissed them as novelty one-hit wonders, which made the sustained brilliance of the follow-up album all the more surprising.

Released a mere one year later (although it should be noted that this is equivalent to approximately 5.4 cat years), Here Comes Santa Claws broke new ground others had assumed was cat litter. On this remarkable album The Jingle Cats leave behind the obvious trappings of conventional rock and pop music, creating a new hybrid form that is at once subtle and startling. Gone are the guitar heroics and obvious hooks of Meowy Christmas, replaced by brooding, textured, ambient surfaces that can only be described as post-music.

While not as immediately accessible as the debut, the second album developed a fanatical cult following. Initial sales were disappointing, but the album eventually went on to sell more than the debut, and was certified triple-platinum in 2001. One of the people most impressed by the album was Radiohead's Thom Yorke, who in a 1997 interview with NPR's Terri Gross claimed the album opened his mind to new musical horizons, and attributed the changes in his own band's sound between Pablo Honey and The Bends to his obsession with the album. Brian Wilson is said to have spent hours in front of his stereo curled in a fetal position, weeping like an infant while playing the first 30 seconds of "Oh Holy Night" over and over again.

But there was a darker side to this unprecedented burst of creativity; many have speculated that the changes in the Jingle Cats' music can be traced back to a July 1994 jam session with Garfield. Garfield reputedly introduced the band to catnip during a break in the sessions, and much ink has been spilled over the effect it had on the music. Several members of the band have struggled with dependency problems for years since then.

Sadly, this level of brilliance could not be sustained, and 2002's Rhythm and Mews was nothing more than a collection of b-sides, fan-club singles, and outtakes. Rumors abound that a third album was recorded and rejected by their label, Jingle Cat Music, for being too uncommercial. Few outside of the Jingle Cats' inner circle have ever heard the music recorded for that album. Among those who have heard the tapes, there is little agreement regarding the music's quality. Some suggest it represented as radical a break from previous song forms as Here Comes Santa Paws, while others describe the music as "tuneless caterwauling." We are unlikely to ever know the truth as the master tapes were apparently shredded when, in a catnip induced frenzy, lead-guitarist Cheese Puff mistook the tapes for a ball of yarn.
Posted by Pete Bilderback at 11:13 AM