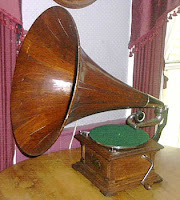 I love sound reproduction technology. I actually own a Victrola, which I brought into my son's preschool for show and tell on my last parent helper day. Obviously most of the kids were not even aware of LPs let alone hand-cranked Victrolas. One kid asked me what it was, and when I told him it was an "old-time" record player, he told me matter-of-factly "you know, you could just get a new one." Unintentionally snide comments aside, generally I find four-year-olds are fascinated to see how mechanical things work, and the Victrola was certainly a big hit. Yesterday when I dropped Will off at school I found his teacher unpacking a brand new all-in-one turntable. I am doing my part to spread the vinyl gospel to the next generation.

I recorded this song by British Music Hall legend Billy Williams directly from the Victrola. Basically I just stuck a mic down the horn and hit record on my M-Audio 24/96 Microtrack. Why did I do it you ask? I have no clue. Maybe it's something to do with my attraction to extreme juxtapositions--using the latest recording and delivery medium to bring you sounds from one of the very oldest means of delivering pre-recorded music. Maybe it's just because I can.

There is something kind of spooky and affecting about listening to music reproduced like this. The song was recorded in 1912, before the advent of electrical recording, so Williams stood in front of a horn to sing this, causing a diaphragm to vibrate which in turn made a needle vibrate while it cut into wax. The playback basically works the same way in reverse. So when you listen like this, despite the poor signal-to-noise ratio, there is no electronic mediation between you and the sound generated over 90 years ago. In a weird way it is like listening to a voice from beyond the grave (Williams passed on in 1915). (And of course I realize the same could be said for any other form of recording, but given its entirely mechanical nature, acoustic recording of this nature strikes me as somehow more direct, at least on an intellectual level).

If you really like this, you can order a boxed set of Williams' complete recordings here. I expect the sound quality will be rather better than this.
Posted by Pete Bilderback at 10:59 AM