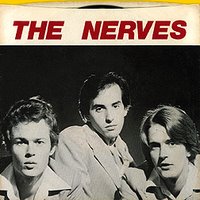 Power Pop pioneers The Nerves featured a trio of talented songwriters in Peter Case, Paul Collins and Jack Lee. After the Nerves' demise Peter Case went on to form The Plimsouls and later establish a solo career as a roots rocker (see my earlier post on Case). Collins enjoyed some success with his next band, The Beat (later the Paul Collins Beat), who put out a couple decent albums the first of which features the amazing "Rock and Roll Girl." But it was the band's least known member, Jack Lee, who wrote their best song, "Hanging On the Telephone" (later famously covered by Blondie as the lead off track on Parallel Lines). After that brush with fame, Lee put out a solo album, Jack Lee's Greatest Hits, Vol. I, in 1981, then hung up his rock and roll shoes (perhaps living happily off the royalties from "Telephone").

This song is pure power-pop nirvana. There is no telling what this band might have been able to accomplish if they had stuck together, but sadly they broke up in 1978 after having released only a single EP. I am convinced The Nerves would have been huge if they could have stuck it out another couple of years.

Posted by Pete Bilderback at 4:32 PM

The entire Nerves EP plus bonus tracks can be found here.