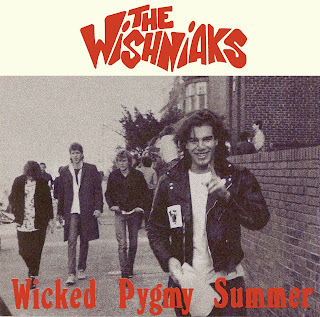 The Wishniaks were one of the few indie-rock bands to hail from Philadelphia during the late 80s. Back in 1989 I booked them to perform at Dickinson College through WDCV, the student-run radio station. Unfortunately, the show never happened because it was blocked by some rather uptight fellow students who ran an on campus organization known as CAB (Campus Activities Board).

The nominal issue for CAB was that the radio station intended to let "townies" attend the show (although the deeper issue was that they didn't want their stranglehold on campus entertainment challenged). So they complained to the administration that the building we planned to use for the show--a new venue dubbed "The Lumberyard"--had been zoned for use by the College only. I pointed out that by that logic, CAB wouldn't be able to admit the mimes or ventriloquists they hired to perform into the building either, but to no avail. The administrator in charge of student life sided with CAB, and told me the show could only go forward if I agreed to refuse admission to non-college students. I had no intention of refusing admission to anyone on the basis of something so arbitrary, so I cancelled the show. In retrospect, I should have gone directly to the President of the College who would have been much more sympathetic to my argument than the low level key-swinger who ended up having the final say.

It's remarkable that so much fuss could have been made over such a charming, unassuming pop band. The people who objected to the show reminded me of the tyrannical preacher portrayed by John Lithgow in Footloose ("dancing leads to sin!"), except that their idea of good music was the Footloose Soundtrack. I have to admit, I thought these people were idiots at the time, but I imagine they are now fabulously successful, most likely working in the Bush administration inventing specious legal arguments as to why it's okay to torture people. And no, I don't think 18 years is too long to carry a grudge.
Posted by Pete Bilderback at 9:56 AM

Email ThisBlogThis!Share to TwitterShare to FacebookShare to Pinterest
Labels: wishniaks

Did you also book The Popes at about that time?

The Wishniaks and an Annapolis, MD punk band called Moss Icon were to play a double bill at a smaller venue that would have been cheaper for us to use because we would only need to rent minimal sound equipment. I had to cancel both bands and felt like crap about it.

That ended up being a very wild show, that I will have to describe one day. I was sure I was getting kicked out of school due to the events that transpired at that show.

Excellent. I love this song. I have it on teh vinyl.

I'm a little late to the party here, but just wanted to say thanks for posting this Wishniaks song. I discovered them years after they broke up when I bought a cd from a bargain bin--they became one of my favorite bands ever. I love their music; the fact that they never made it big and are now largely forgotton seems incredibly tragic to me. Then again, maybe that's part of the appeal...

where is the MP3?

what track is it?

I've been trying to find this 7" and the "Ticker Tape Trash" 7"--as my cassette copy was lost years ago. I remember "Ticker Tape Trash" being phenomenal, as was their debut album. All I own these days is the sub-par "Catch 33" album: would love to hear the earlier stuff again.

I know this many years after the above were all written. But I was the dreamer that put out all the Wishniaks records, except for the posthumous Spanish record. I still have some stock on their debut EP, Nauseous & Cranky, and the "Tickertape Trash" single. Anyone is welcome to contact me at fs.morejunk@gmail.com about acquiring them.