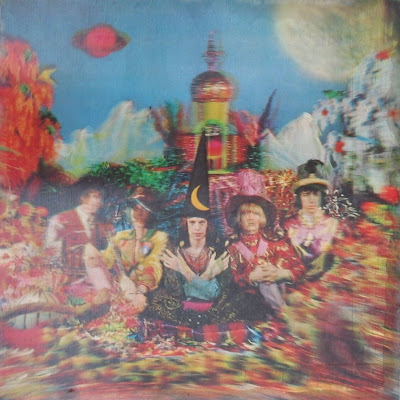 As many of you probably know, today is a big day in rock music history. Yes, that's right, we are only 191 days away from the 40th anniversary of the release of The Rolling Stones' Their Satanic Majesties Request (original release date: December 8, 1967). It's hard to believe it's almost been forty years since this album was released. I'm only 37, but I remember well the many celebrations, speeches, dedications, and all around pandemonium that marked the occasion of its 20th anniversary release.

I personally plan to celebrate the 40th anniversary in a manner so depraved that it is too shocking to post on the internet. Have you made plans for December 8, 2007 yet?
Posted by Pete Bilderback at 3:56 PM

i'm pretty fond of this record as well.

as others have suggested, if "Sing This All Together (see what happens)" was shit-canned and replaced with "dandelion" and "we love you", this record would probably receive the kind of recognition it deserves.

I'll celebrate by Kiss's version of 2000 Man over and over again.

Good point about "Dandelion"/"We Love You" which was a great single, and would have fit very nicely onto the album.

Kiss made a good choice in covering 2000 Man, which was probably the best song on (which album?) Dynasty. Redd Kross' cover of "Citadel" is pretty boss too.

I'm going to try to put together an extended essay on the album for the anniversary of it's release, because well, someone should.