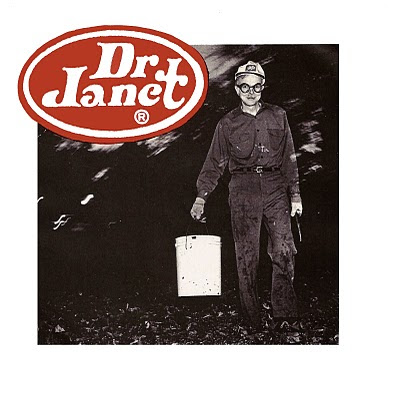 2007 marks the 17 year anniversary of the only release by indie-rock super-group Dr Janet. I don't think any major commemorative celebrations have been planned, but I could be wrong about that. This was a one off project that featured Gary Lee Connor of the Screaming Trees, Ira Kaplan of Yo La Tengo, Matt Sweeney of Skunk, and Lyle Hysen of Das Damen. (Bonus points to the first person who can tell me which one of these guys would go on to record with Johnny Cash). One could think of the group as a Blind Faith or Rhinoceros for the 90s. Actually, I suspect all these guys just happened to be in New York in August of 1990 and someone said "hey, let's make a single."

With it's epic sweep and psychedelic guitar jamming, the A-side "Ten Years Gone" would not have sounded out-of-place on the Screaming Trees' major-label debut Uncle Anesthesia. Connor is not Mark Lanegan's equal as a vocalist, but the track works well enough. 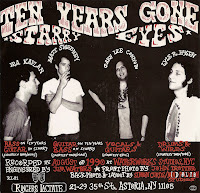 The real treat in my opinion is the B-side, a cover of The Records' power-pop hit "Starry Eyes." The band is smart enough not to muck around with the song's chiming guitars and pop hook too much, while adding just enough wah-wah guitar to distinguish it from the original. It's a nasty kiss-off to a former manager, and Connor's vocals bring the caustic nature of the song to the forefront a bit more than in The Records' version.

The Records' hit version of the song (truly one of the all-time great power-pop anthems) is available on the compilation Smashes, Crashes and Near Misses, while the original demo version can be found on Paying For The Summer of Love. While The Records' Virgin recordings are just fine, I prefer the demos on Summer of Love which capture the band at a time when they still had a strong 60s influence that they largely abandoned in favor of a more contemporary and less-compelling sound on their first album.

As for the Dr. Janet 7" if you want a copy, I suspect eBay is your best bet.
Posted by Pete Bilderback at 10:22 AM

I'm a big fan of The Records and I also prefer the demos to the later recorded versions. I'd never heard this cover before but I have to say it's rather splendid. Thanks for sharing!

Hmmm.... and if I remember correctly, the name Dr. Janet came from Janet Maxwell, a PhD student in chemistry at the University of South Carolina that Gary was dating, or at least friends with, at the time.

She was my organic chemistry professor at Angelo State University 4 years ago. She is still there :)