The Wonderful World of Cat Butt 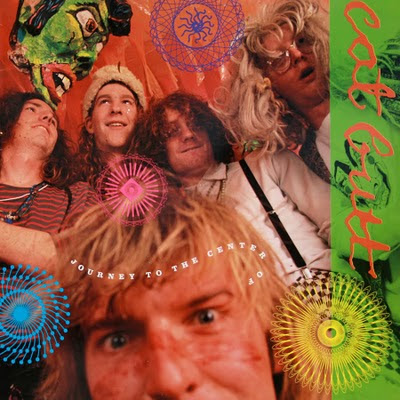 "Come on over tonight/We'll put on some Cat Butt 'n' do it up right." Guided By Voices "Pendulum" (Same Place the Fly Got Smashed, 1990)

For a band whose released recorded legacy consists of one 7" single, one compilation appearance and one EP, Cat Butt casts a surprisingly long shadow. It might be overstating things to say that Journey to the Center of Cat Butt was the most important album of the last 25 years, if for no other reason than that it wasn't even an album, it was an EP.

While many artists with dozens of albums to their credit get a mere one-line bio (or less) at AllMusic.com, Cat Butt has a 1,392 word essay devoted to their brief, glorious existence.

And why not? The band was great. Cat Butt neatly encapsulates everything about "grunge rock" that would need to be scrubbed out for it to become a mainstream, corporate success. Forget Nirvana, everything worth knowing about grunge is etched into the grooves of the six tracks on this EP. It's all there: the mud, the blood, the urine, the self-abuse and the utter, simpleminded stupidity. This is rock at it's purest.

Journey to the Center of Cat Butt--legendary as it has become--seems unlikely to be reissued anytime soon. The band so thoroughly burnt their bridges by trashing a label-owned tour van that no mention of them shows up on the Sub-Pop's website.*

it's damn near impossible to find that LP for a good price and I really want to put the full EP on my ipod.

Hi there,
I agree with these folks, it would be awesome if you could post the other tracks from the EP.

Is there anyone out there who could send me a copy -- be it on tape or CD -- of Cat Butt's "Journey to the Center Of" EP? Like a previous post states, it's impossible to find, and I've tried for years, even while living in Portland, OR. Any help would be hugely appreciated.

My dad was the drummer for Catbutt at the time of this EP, and I think it's amazing that it generated such a response. Being a part of his life and the whole grunge scene has probably shaped my life more than anything else.

This band's body of work is small but stupendous. I guess CDs are irrelevant now, but a "Complete Masterwerks" CD would go down pretty smooth around these parts.