Ron Klaus, He Reissued His House 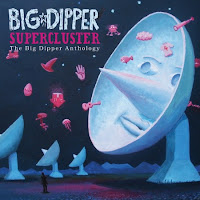 Merge Records reissues Big Dipper's (mostly) complete Homestead era recordings today. Supercluster: The Big Dipper Anthology contains the band's two Homestead LPs, Heavens and Craps, plus the Boo Boo EP, assorted compilation tracks, and a few previously unreleased demos. It also includes a CD of unreleased tracks recorded after the band's major label fiasco. You get 3 CDs for the low, low price of $15 (only $10.99 if you are willing to settle for MP3 sound quality and forgo the liner notes, or $13.49 if sound quality matters to you but liner notes don't). Personally, I'm eager to read the liner notes.

As complete and excellent as the Merge anthology is, there a couple things missing. Obviously, Slam, the band's disappointing major label debut is not included. I can also think of a couple other stray tracks not represented. One is their excellent (post-Epic fiasco) cover of Pete Shelley's "Homosapien" from Freedom of Choice, a compilation of New Wave covers that benefits Planned Parenthood. Just buy that already. The other is a cover of Wings' "Jet" that was included on a 45 with an issue of Bucketfull Of Brains magazine circa 1987.

To celebrate the occasion, I am reposting an older post in which I (unsuccessfully) sought to solve the mystery of Ron Klaus. Over one year and four restraining orders later, I am no closer to solving the mystery. Maybe the liner notes to Supercluster will help put some of these burning issues to rest. 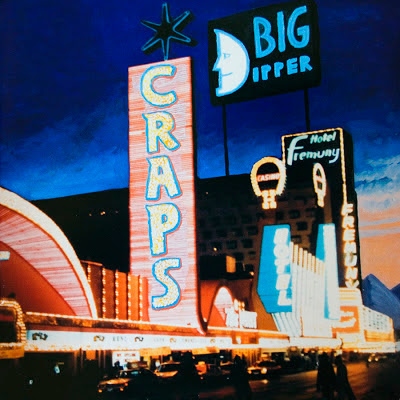 Ron Klaus is something of an enigma. Let's review what is known about Ron Klaus: We know he had a party, we know he had a band, we know he had a thousand loving friends, and most importantly we know Ron Klaus, he wrecked his house. We know these things because of Big Dipper's 1988 college radio smash "Ron Klaus, He Wrecked His House" written by Ron's former Embarrassment band mate Bill Goffrier. But there is much we don't know. We don't know why he wrecked his house, we're only told "he had his reasons." We don't know what he did after he wrecked his house. Did his insurance cover any of the damage? Where did he live after wrecking his house? Was the house salvageable, or was it a total loss? Where is he now? Does he regret wrecking his house, or would he do it all over again if he had the chance? I was determined to find answers to these questions and more.

So I went searching for Ron Klaus. I had heard a rumor that he was now a captain of a whale watching ship on Cape Cod. So I started making some phone calls. After four wrong numbers I hit paydirt.

Me: Hello, Is this Ron Klaus?
RK: Yeah.
Me: Are you the Ron Klaus who wrecked his house?
RK: I guess so, yeah. What's it to you?
Me: Well, I was just curious about it, you know?
RK: It's really none of your f****'n beeswax. What do you care? Who are you?
Me: Well, it's just that, you know, there's the song "Ron Klaus, He Wrecked His House."
RK: What the f***k are you talking about? Are you a cop?
Me: No, It's just that your former band mate, Bill Goffrier wrote the song about you and...
RK: I've never been in a band, are you some kind of Moonie or something?
Me: Isn't this Ron Klaus, former bass player for the Embarrassment?
RK: Did you say Ron "Klaus"? This is Ron Kraus, K-R-A-U-S.
Me: Oh, uh sorry, I think I've got the wrong guy.
RK: Yeah, I think so dips**t.
Me: But you said you wrecked your house, what happened?
RK: I fell asleep smoking in bed and the house burned down. Then my wife left me and took the cat with her.
Me: I'm sorry to hear that.
RK: Don't ever call me again.

So that didn't work out too well, but I was undaunted. I decided to Google Ron Klaus to get some more information. I found a couple Ron Klauses, and I figured one of them had to be my guy.

So next, I tried a Ron Klaus who is an engineer and pastor. Could it be that after burning down his house that Ron Klaus went back to school, got a PhD in Engineering, then found God and became a pastor and a missionary? This was exciting! My mind was racing! Maybe Ron decided to study Engineering in order to design a house that couldn't be wrecked. And maybe he started preaching to warn young people about the evils of wrecking their house. There was a screenplay in this! Maybe a book too. This could be the next Beautiful Mind. But before I started writing my Oscar acceptance speech, I figured I should call Ron and get the skinny.

Me: (excited) Hello, is this the Ron Klaus who wrecked his house?
RK: No. (click)
Me: Hello? Hello?

Another dead end. I'm out of leads now, and Ron Klaus is perhaps even more of an enigma than when I started my search. If you have any information about the Ron Klaus who wrecked his house please let me know. I have questions that need to be answered, I have a screenplay to write. Hollywood needs me.
Posted by Pete Bilderback at 9:42 AM

This compilatiomn got a nice review in Entertainment Weekly. EW, while frothy, is actually a very fun magazine to read. It mixes in some hip choices in music, film, books, etc. in addition to the blockbusters.

From what I remember EW has always had a pretty good music review section. Good to see them giving Big Dipper some love. I have a copy on order.

I remember hearing that the wreckage occurred when the song's namesake was moving out of a rental that was scheduled for demolition so he hosted a house wrecking party--can't provide sources, alas.

A lie! I CAN cite the source (Big Dipper Combines Punk With Melody By KAREN SCHOEMER
April 13, 1990, NY Times) which quotes Captain Bill himself:

'Ron was the bass player in the Embarrassment,'' Mr. Goffrier said. ''When his landlord gave him a month's notice to move out because the house was being demolished, he decided to have a big house-wrecking party. He invited everyone to bring sledgehammers, tools, whatever implements of destruction, and just bring the house down. A lot of it was hauled away and taken home as souvenirs. I got a doorknob.''

I had always heard that after the party was over and the house demolished, he learned that the landlord lied about the house being scheduled for demolition. He just wanted Ron to move out. I think this is confirmed by the lyric "he had his reasons, or so he thought."

Awesome information. I had not heard any of this.

Heard the song on an indie radio station at the university in Ghent, Belgium long time ago and taped it on a cassette. Listened to it till the tape got yeah ... wrecked.
Song always stayed in my 'whaw who is that band' memory.
And always wondered who the heck Ron Klaus is. Glad to see I was not the only one.
Thanks for the story.

I became a big fan of The Embarrassment after Big Dipper was formed, and of course loved Big Dipper too. I turned a friend from LA onto both of them and made sure to swing him down Indiana St. when we were in Lawrence, KS. I was never sure where the house was, exactly. I was lucky enough to see both bands at the Bottleneck, and the Embos reunion show in the late '80s is one of the best I've ever seen. A friend of mine who knows a lot of minor music celebrities got to hang out with the whole gang one time and has a good story.

I am the landlord. None of this is funny.