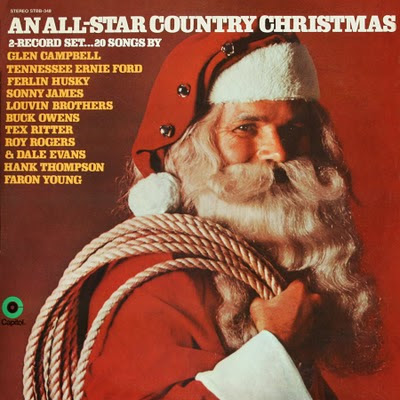 I've already been hearing Christmas music for at least the past month, but I just don't think it's right to play Christmas music until after Thanksgiving. I mean, don't the holidays seem a little less special if they last six months?

Anyway, I'm not sure how much holiday themed music I'll be posting this year. I do have a few things, including some cuts off this nice Capitol Country Christmas sampler I stumbled upon recently. Some of the tracks on this set are also on the great (and criminally out-of-print) Rhino compilation, Hillbilly Holiday. But there's lots of nice stuff on it that was new to me as well, including "It's Christmas Time" by the Louvin Brothers, which strikes me as a nice way to kick off the holiday season.

Strangely, neither this song, nor the wonderful "Santa's Big Parade" are available on the MP3 download of Christmas With The Louvin Brothers, although they were added as bonus tracks to the CD version (which is of course out-of-print).

I think it would be fair to call this song corny. But at the same time it is impossible deny the heartfelt beauty of Charlie and Ira's harmonizing.
Posted by Pete Bilderback at 10:29 PM No comments:

This is currently my 2 year-old daughter's favorite video. I can see why.

Posted by Pete Bilderback at 8:54 AM No comments:

Email ThisBlogThis!Share to TwitterShare to FacebookShare to Pinterest
Labels: kids 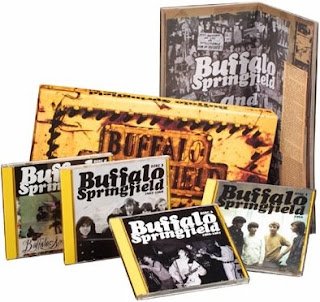 Just to give a heads-up, it looks to me like the Buffalo Springfield box set might be falling out-of-print. There are still some reasonably priced used copies available on Amazon, but prices appear to be creeping up. Then again maybe not, because it can still be ordered new directly from Rhino.

I only mention this because with Neil Young involved, you never know when a release is going to appear or disappear. Speaking of which, hardcore fans might be happy to know that his long-promised, massive Archives Volume One box set is now available for pre-order on DVD or Blu-Ray at Amazon. It has a current street date of January 27, 2009 (and with a little luck it just might actually be available for purchase for next year's holiday season).

I'd be shocked if the long-delayed archives set actually meets a January 27th release date, but in the meantime, those hoping to find a little Shakey in their stocking this year might consider adding Sugar Mountain: Live At Canterbury House 1968 to their wish list (this one is promised for December 2nd, and so far its release date has only been pushed back once).

Of course, if you don't already own it, you can't go wrong with the Buffalo Springfield Box Set. Even if you own all three albums, there's lots to be discovered in the box such as nice acoustic demos like this one for "Flying On The Ground Is Wrong."

There's also a wealth of previously unreleased material such as "Down, Down, Down," a Young-penned song that formed the basis for "Broken Arrow."

The box also features a number of previously unreleased songs recorded after the second album as the band was falling apart. Tracks like the Richie Furay sung "Whatever Happened To Saturday Night" prove that The Springfield's posthumous swan song, Last Time Around, could have been a much stronger album if it had been assembled more carefully.

Of course whenever Neil Young compiles something there are bound to be as many complaints about what's missing as excitement about what's there. A few tracks from Last Time Around are not represented, but the most common complaint is the absence of the nine-minute version of "Freebird" "Bluebird" that has only ever been available on a two LP compilation released in 1973 and has never been released on CD. The four and a half minute version of "Bluebird" that appeared on Buffalo Springfield Again (and the box) was edited down from this extended performance (with a different, banjo-fied, ending tacked on). An even shorter version of the song (sliced all the way down to 1:59) was released as a single and reached #58 on Billboard's Pop Singles chart in 1967. Amazingly, this was the only song from Buffalo Springfield Again to chart.

Legend has it that either Neil or Stephen Stills, or possibly both, never wanted the long version of "Bluebird" released in the first place. Despite their objections, once released the track became a minor staple of classic rock radio, and many fans of the band consider it the version of the song to hear. Whatever you think of the then ascendant tendency to turn pop songs into extended semi-improvisational rock jams, the long version of "Bluebird" holds an important place in the Springfield canon: the band was known to end their live sets with epic-length versions of the song. I imagine Stills and Young view this version as a poor substitute for the legendary live performances of the song. But since no quality Buffalo Springfield live recordings are known to exist, this is all we have.

As extended guitar epics go, I would rank this somewhere between Love's "Revelations" (tedious) and Television's "Marquee Moon" (sublime). There is some nice guitar interplay between Stills and Young, but at times Stills falls back on blues cliches that make the jamming sound predictable. Or perhaps it only sounds predictable in retrospect, this kind of thing probably sounded a lot fresher before the seventies happened. Maybe you had to be there. 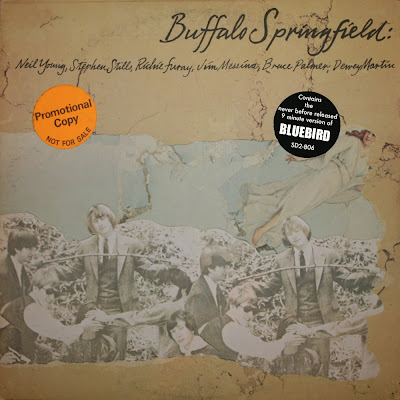 Posted by Pete Bilderback at 7:08 AM 3 comments: 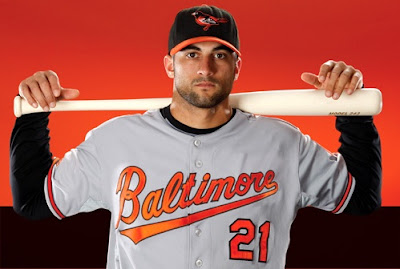 After a 37 year absence, The Baltimore Orioles finally bring the word "Baltimore" back to their road uniforms today. It's about time. Those who don't understand the relationship between Baltimore and Washington and their respective sports teams will probably have trouble understanding why this is such a meaningful development to Baltimore sports fans. But it always struck many of us as a slight against the city and its people that our own baseball franchise refused to put the word "Baltimore" on its uniforms for so long.

Baltimoreans (and those like me who grew up in the Baltimore/Washington suburbs but chose to identify with Baltimore over Washington) are a proud, stubborn, and--it must be said--slightly insecure people. John Elway refused to play for us. My blood pressure still rises slightly every time I see that tool on TV. Then we lost our football team and after years of being jilted and screwed by the NFL (and Washington Redskins) we had to steal another town's to get one back. (I'm sure that sucked for Cleveland, but at least they got to keep their team's name and records, ours skipped town in the middle of the night on Mayflower moving vans). Our own airport changed its name to include the dreaded "W" word (some of us still defiantly call it "Friendship Airport"). At least we never had to endure the insult of an official name change like "the Washington Orioles of Baltimore." Thank God for that.

The team has also tweaked their uniforms slightly in other ways, including yet another relatively minor change to the bird logo that appears on their caps:

The new bird is a little better than the old one. It's a little more streamlined and stylized, and they mercifully dropped the pointless yellow highlights. But in terms of branding it still says "Audubon" to me more than it says "Baseball." Also, the bird's black head is (still) not sufficiently distinguishable when put on a black baseball cap--from a distance it kind of gets lost.

Of course, there is a logo that works much better. Graphically bold, at a glance it says both "Baseball" and "Baltimore." I have no idea why the Orioles don't just give up on all these variations on orthinologically correct birds and go back to the logo that was associated with the franchise from the 1960s through the 1980s:

There is a reason you see more Orioles fans wearing throwback caps than the new ones, and it's not just because the team hasn't been worth a damn in so long. This is a butt-kicking logo.

Bringing "Baltimore" back to the road jerseys is most welcome (and long overdue) development. I'll take it. Would it be greedy to also hope for a winning season?
Posted by Pete Bilderback at 11:35 AM 5 comments:

Email ThisBlogThis!Share to TwitterShare to FacebookShare to Pinterest
Labels: baseball 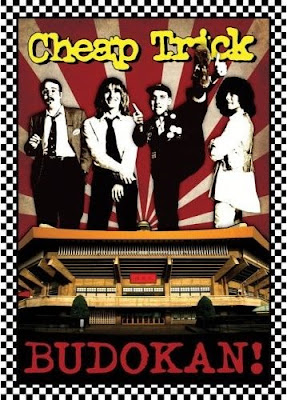 I strongly suspect releases like this are nothing more than the death tremors of the once mighty music industry. Nevertheless, a 3 CD/1DVD set documenting Cheap Trick at Budokan looks pretty cool to me.

Sony/BMG have disabled embedding, but you can check out clips on Cheap Trick's YouTube channel. In terms of musical and visual impact, Cheap Trick was the greatest mainstream rock act of the late 70s. I generally despise arena rock from this era, but by incorporating some of punk's energy and goofing on arena rock's more bombastic tendencies, Cheap Trick made their music irresistible. Or to put it another way: Rick Nielsen rules!
Posted by Pete Bilderback at 2:11 PM 6 comments: