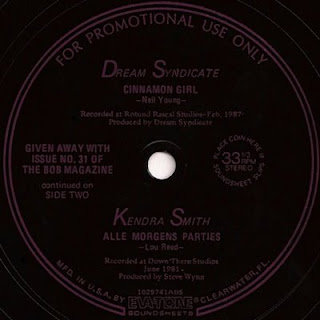 I recently got a request to re-up Kendra Smith's German language version of "All Tomorrow's Parties," which I originally posted long ago. It's worth hearing again, but I thought I would also take the opportunity to re-record the track, and apply some of what I've learned about digitizing vinyl in between time. This was taken from a flexi disc given away with The BOB Magazine. It's never going to sound like the kind of recording audiophiles use to demo interconnect cables, but I think it sounds a lot better than the first time I did it. (Long time readers who downloaded this back in 2006, let me know what you think).

I don't have a lot to add to what I said originally, which wasn't much to begin with. It's uncanny how fully Kendra Smith and Steve Wynn were channeling The Velvet Underground when they recorded this track back in 1981. If I didn't already know better and someone told me this was an alternate take from the Velvets' session that produced the Norman Dolph acetate, I would believe it. Slavish imitation? Sure, but also great.

I'd like to apologize to my regular readers for not posting in a while. I've been suffering from a case of what might charitably be called writer's block. But I'm going to keep posting, if not necessarily at the rapid pace I once did.

Note: While Kendra Smith may have spent some childhood years in Germany this re-translates back to 'All Morning's Parties'. More correct would have been 'Alle zukünftigen Feiern'. While the english loan word Party is also correct, my generation (same as Kendra's) preferred the french loan word Fete.

Interesting. I suspect "Alle Morgens Parties" was easier to sing than "Alle Zukünftigen Feiern," but yeah, "All Morning's Parties" doesn't make much sense. It still sounds cool though. Thanks.

I still have that flexidisk somewhere! I wonder if it still plays...