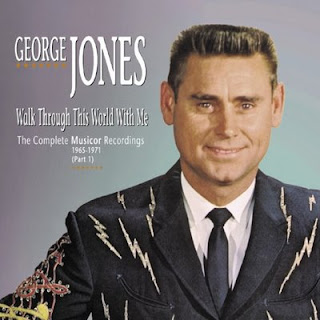 George Jones' classic Musicor recordings have been out of circulation for years while a lawsuit was resolved. Jones' Musicor recordings were never issued systematically or in full until now! Jones' Musicor recordings were never issued in premium sound quality until now! This CD boxed set includes all-time classic George Jones hits, such as 'Love Bug' (revived by George Strait), 'Take Me', 'Four-O-Thirty Three', and 'Walk Through This World With Me'. Includes two complete George Jones sessions with false starts and alternate takes. Be there with George in the studio! The first of two boxes that will eventually include every Musicor recording, except the duets with Gene Pitney (available elsewhere on Bear Family)! -- These were George Jones' truly classic years. After more than a decade as one of country music's top stars, newfound maturity and soulfulness augmented what was already the greatest voice in country music. The six years from 1965 to 1971 that Jones spent on Musicor Records were marked by personal turmoil and unprecedented success, but through it all he kept minting one country standard after another. This is the first part of Bear Family's comprehensive two volume edition of Jones' complete Musicor recordings, covering all sessions from 1965 until mid-1967. Until now, the Musicor sides were randomly packaged and many were unavailable, but the two Bear Family boxes (plus one CD of duets with Gene Pitney available elsewhere on Bear Family) will tell the complete story. Here are the fabulous original albums, including his tributes to Dallas Frazier and the duet albums with Melba Montgomery, plus such all-time George Jones standards as 'Things Have Gone To Pieces', 'Love Bug', 'Take Me', 'I'm A People', 'Four-O-Thirty Three', and one of the greatest ever country classics, 'Walk Through This World With Me'. It's all here in stunningly restored sound together with ten previously unissued recordings, including fabulous early versions of 'Love Bug' and 'Take Me', recorded in Houston. -- In all, this set includes 142 songs on five CDs, plus two complete sessions from Houston with false starts and alternate takes. -- This set includes liner notes by Rich Kienzle and a complete discography by Don Roy, Kittra Moore, and Richard Weize.

I probably have a dozen of George Jones' Musicor LPs, but not anywhere close to all the music he recorded for the label. Also, while the quality of the songs on these albums tends to be quite high, the LPs themselves are another matter. The condition of the LPs is variable (not all of Possums' fans are also audiophiles apparently), and there are many, many tracks that are repeated across LPs. Anytime I buy a Musicor album I didn't already own I get on average three or four new songs because of the high percentage of repeats.

Of course I'm gonna hold on to those LPs, if for no other reason than to keep all those beautiful pictures of George in all his buzz cut, nudie suit splendor. Now how about a complete Starday/Mercury set?
Posted by Pete Bilderback at 11:40 AM 3 comments: