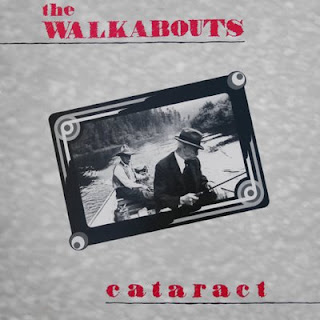 The Walkabouts' Cataract was the first non-grunge album released by Seattle's Sub-Pop records. Much more rooted in folk music than, say, TAD's God's Balls, Cataract was still no precious affair. The influence of punk is clear in some of the rapid tempos and tough guitar work, but the Walkabouts music is as big and open as America itself.

Unfortunately, America proved not to be open to the Walkabouts. Sub-Pop dropped the band in the U.S. after their next album--1991's near perfect Scavenger--failed to meet sales expectations despite some slick production and high-profile guest spots from Natalie Merchant and Brian Eno. The band's subsequent albums have all been European-only releases. It seems absurd that one of America's best bands, playing distinctively American music, cannot get their music released in their home country, but perhaps there is something appropriate about that. The Walkabouts eventually relocated to Europe where the bulk of their small, but devoted, following resides.

Every track on Cataract is strong. I picked two of my favorites, but any other two would have done just as well. The album was released on CD in conjunction with the Rag & Bone EP, but that has been out-of-print for ages. Many of the group's albums are still available, and any and all of them are worth checking out. Also worth checking out is Chris Eckman's new solo album, Last Side of the Mountain, which features lyrics adapted from Slovenian poet Dane Zajc. Zajac's vivid imagery sounds right at home with Eckman's rootsy Americana, and beautiful guest vocals by fellow Walkabout Carla Torgerson make it difficult to distinguish it from a Walkabouts album. Highly recommended.
Posted by Pete Bilderback at 1:23 PM 4 comments:

I came across some exciting news for fans of Arthur Lee and Love. Sundazed is releasing a previously unissued Love album from 1971:

I assume this is the album that Lee recorded for CBS--tentatively titled Dear You--after his deal with Blue Thumb expired. While I was aware of the existence of this album, I have never heard it, and am not aware of the tapes ever circulating in traders circles (although I am not really up on these things). Either way, this is a major find, and I'm glad this material will finally see the light of day through Sundazed.

But [think of a Ronco infomercial here] that's not all you get! According to Sundazed:

And that's not all! We've also uncovered a marvelous batch of acoustic demos for the ‘71 album, featuring just the magical voice of Arthur Lee and his acoustic guitar. It's a thrilling twin-discovery of ultra-important material that no one knew existed.

As a precursor to the release of this breath-taking Arthur Lee and Love material (to be called Love Lost), we've created a 7” single of two knockout tracks from the demo sides. “Love Jumped Through My Window” is cut from the same fine cloth as every heart-stopping Love track you've ever heard. And the flipside, “Sad Song,” — in alternate take form here — will appear only on seven-inch vinyl. The Love maestro is in superlative voice on both of these exquisite unheard sides.

These two songs eventually appeared on Lee's 1972 solo debut, Vindicator. From the short 30 second clips Sundazed has made available these acoustic demos sound far better than the over-cooked hard rock of Vindicator, so this looks to be a very promising release. The single will be released August 25, and is available for pre-order from Sundazed now.

I don't have any information beyond that this at this point, but I have made an inquiry with Sundazed and will keep you updated as details emerge.

In other Lee/Love news, I noticed that a label called Friday Music has reissued a couple of Lee collectors items. The first is the Arthur Lee album that was first issued by Rhino back in the 80s that I reviewed a while back. The other is an album called Love Live featuring material Lee recorded with Bryan Maclean in 1978 (Rhino originally issued that one as a picture disc).
Posted by Pete Bilderback at 1:10 PM 3 comments:

Great news for Galaxie 500 fans. damon & naomi's label, 20-20-20, has reissued Galaxie 500's three studio albums on premium vinyl and as digital downloads. These albums have long been unavailable on vinyl, and the original Rough Trade pressings were nothing special to begin with. The band seems to have gone all out to make these LPs sound as good as possible. The vinyl was "remastered by Alan Douches and [original producer] Kramer at West West Side Music, cut by Kevin Gray at AcousTech, pressed to virgin vinyl at RTI, and packaged in old-fashioned tip-on style jackets at Stoughton." You really can't ask for better than that, so I'm very excited to hear these. (As an aside, I can't help but note that while these are being reissued on LP--a format declared dead around the time the albums were originally issued--they are not being re-released on CD. Who's the dead format now?)

The albums are available from Galaxie 500's official online store in a variety of ordering options. MP3s are have been encoded at 320kps, but even better the band has made Apple Lossless files available for download at the same price (a practice I hope more bands and labels will follow). If you only want the vinyl, you can order the LPs directly from 20-20-20 for only $15 a piece. This is a very reasonable price for LPs mastered at AcousTech and pressed at RTI, most labels charge nearly twice that much.

As for the music, I can say without fear of hyperbole that these are three of the best indie-rock albums ever released, as well as some of the best albums released during the 1980s. If you know Galaxie 500 you already know this, if you don't I strongly recommend you download the free MP3 of "Fourth Of July" as well as the video for damon & naomi's "Song to the Siren" (see below).