My friend Pete has mentioned to me a couple of times that he thinks it would be interesting if I put together a post, or series of posts, on how to transfer records into the digital domain. I've been reluctant to do so for a number of reasons, the most important being I do not consider myself any kind of expert on the subject. The internet is full of "experts" who can tell you what you should and shouldn't do on any variety of subjects with absolute certainty. I can really only tell you what I've done, and what I think has worked best for me.

One recommendation I can make without any hesitation is that, if you are doing "needledrops" of LPs or 78s, you should give the program Click Repair a try. Click Repair is a reasonably priced "shareware" program written by a mathematician named Brian Davies that uses sophisticated algorithms to identify and "clean" clicks and pops from digitized vinyl and shellac records.

I was initially very skeptical about any program that "automagically" repairs clicks and pops in a recording, assuming that it would necessarily affect other parts of the recording for the worse. But after having tried the program, I learned that with a little experimenting it was not difficult to keep "false positives" (instances where music, not noise, is "fixed") to an acceptably low level, while vastly reducing the amount of clicks, cracks and pops on a recording. The important thing to note here is that Click Repair is not a "filter" that affects the sound of an entire recording, but rather a program that seeks out samples that it identifies as clicks or pops, and "repairs" them. In other words, it basically leaves the music alone. (You can read many more details on how the program works at the program's website).

Below you will find a link to a sample from a copy of Frank Sinatra's In The Wee Small Hours I recently picked up for 25 cents. The record looked a little beat up, but I figured it might clean up nicely. Unfortunately, I was wrong about that, as you can hear in the initial, unrepaired, selection. The raw file is followed by the same selection after having been run through Click Repair. To my ears the results are pretty remarkable. Take a listen and see what you think.

Now, admittedly, I've picked a rather extreme case (an LP that was pretty much trashed) to emphasize what Click Repair is capable of, but I've found that even LPs in reasonably good condition can also benefit from a run through Click Repair (for records that are in better shape you can use a lower sensitivity setting to further minimize the likelihood of "false positives.")

You can demo Click Repair for free for 21 days, after that you will need to purchase a $40 license. I did so happily.

I got some sad news from my Mom today when I learned that an old school friend of mine, Damon Crowdy, passed away recently. I was sad to learn that Damon died of heart failure after a long struggle with kidney disease.

I hadn't seen Damon in twenty years or so, but I never forgot him. It's not possible to forget a guy like Damon. I was entirely unsurprised to learn from his obituary that as an adult Damon dedicated his life to helping others. Damon was one of the funniest people I've ever known, but unlike so many other children, there was never a hint of cruelty in his humor. And while Damon had a rowdy side as a child, there was also always an almost spiritual quality about him.

If Damon liked you, he would invent a funny nickname for you--I was "Squeaky Mongueeky"--a silly name that nevertheless always made me feel special. I can remember reading the book I Wish I Had An Afro, a story of a young boy's emerging sense of black pride, with Damon in Elementary school, and how Damon created a musical version of the story to the tune of "If I Were A Rich Man" from Fiddler On The Roof. Maybe you had to be there, but it was genuinely hilarious. Most kids are not nearly so clever in their attempts at humor.

I'm sure that Damon touched many lives after I last saw him, and I'm sure that many people are better off for having known him. I know that I am. I will always remember him as a warm, funny, cheerful kid, and regret I didn't get to know the man he became. My thoughts and prayers are with his family.
Posted by Pete Bilderback at 10:40 AM 2 comments:

Email ThisBlogThis!Share to TwitterShare to FacebookShare to Pinterest
Labels: Friends and Family, R.I.P.

The Feelies - The Good Earth Reissued 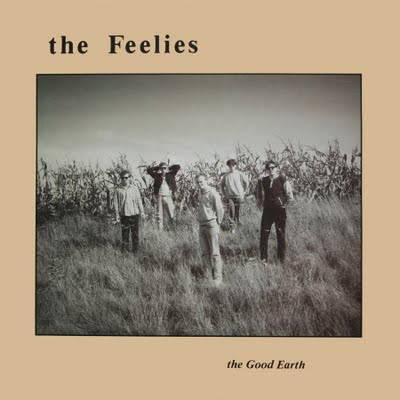 I wanted to provide yet another Feelies update now that my vinyl reissue of The Good Earth has finally arrived.

I will admit to a small amount of consternation when I first learned that the vinyl reissues of Crazy Rhythms and The Good Earth would not be mastered from the original analog master tapes. Now that I have actually heard them, I will also admit that any sense of concern about that was totally misplaced and misguided. Major kudos are due to Andreas Meyer from Tangerine Mastering for the magic he has worked in remastering these albums for vinyl.

In my previous post I noted that I was hard pressed to hear any differences between a Stiff original pressing of Crazy Rhythms and the Bar/None reissue. I could hear differences between a Coyote/Twin-Tone LP pressing of The Good Earth and the Bar/None reissue, and they were mostly in favor of the reissue. First off, the reissue is a better, quieter pressing than the Coyote original, which is a helpful thing because there are some long quiet passages on the album. Beyond that, the reissue has a subtly crisper, more open sound without changing the essential sonic character of the album in any way.

I also had an original Coyote CD on hand for comparison, but the less said about that the better, because it is an absolute sonic disaster. The old Coyote CD turned an album with a warm, inviting sonic character into something shrill and unpleasant. The old CD only reminded me of why I hated CD sound for such a long time.

As with Crazy Rhythms, I downloaded the album plus bonus tracks in WAV format, and once again, while they sounded good, it was obvious they were slightly dynamically compressed compared to the LP. Nevertheless, the new digital version sounds far better than the original CD. The download-only bonus tracks are not quite as interesting as was the case with Crazy Rhythms. The two covers were previously available on the No One Knows EP, and a recent live version of "Slipping (Into Something)" once again proves the reconstituted Feelies have not lost a step.

The only quibble I have with the reissue (and it is a minor one to be sure) is that about ten seconds of silence present on the original LP between "Tomorrow Today" and the album closer "Slow Down" has been removed. I always kind of liked the way "Slow Down" came in after such a long quiet period ("Tomorrow Today" also features a very long, slow fade out). Curiously, this silence is also not present on the original Coyote CD, so it's arguable whether it is necessary for the sake of "authenticity." I always kind of liked the effect, but its absence is not enough to prevent the reissue from becoming my new "go-to" version of the album.

Finally, a few words about the music itself. If I haven't said much about it to this point it's because I assume you know it's great. Crazy Rhythms seems to be the album that has gotten the most attention over the years, probably in part because it has been out-of-print longer. It would be a shame if The Good Earth were overshadowed by the earlier album, because its charms are at least equal to those of its predecessor.

The Good Earth showcases a less jumpy and nervous version of the Feelies. The rhythm section of Brenda Sauter (bass), Stanley Demeski (drums) and Dave Weckerman (percussion) was less aggressive than the Crazy Rhythms-era combo of Anton Fier and Keith De Nunzio. This, combined with a greater amount of strummed acoustic guitar, led to a more relaxed, pastoral sound which is beautifully reflected in the cornfield photo and earth-tones on the album cover.

Despite the more laid-back vibe, there is still plenty of interesting stuff going on rhythmically, but it emerges from the mix in a more subtle fashion than previously. Some of the songs reflect Mercer and Million's longstanding interest in Brian Eno's ambient music, but the influence of country and folk music is just as clear. All-in-all, it makes for an entirely unique, and highly appealing sonic concoction.

I simply cannot recommend both of these long-overdue reissues highly enough, even to those who already own the albums in other forms. The LPs sound absolutely gorgeous, and the digital tracks sound very fine as well. Both albums, as well as a limited edition 7" of "Fa Ce La," are available directly from Bar/None.
Posted by Pete Bilderback at 1:29 PM 1 comment: 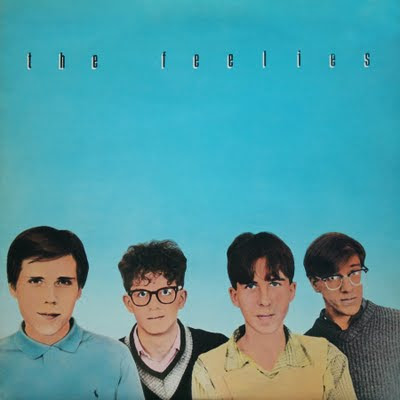 I just wanted to provide a quick update on the Feelies reissues. I finally got my vinyl copy of Crazy Rhythms (still waiting on The Good Earth). In terms of sound quality, the LP reissue is outstanding. I had an original Stiff pressing of the first album on hand for comparison. As hard as I tried, I could not hear a difference between the two, which was kind of surprising considering we know the reissue was digitally sourced. The digital source must have been better than CD resolution, because I could see frequency content extending all the way up to 40 kHz. The pressing was very quiet, which is a really good thing considering that some of the song intros feature extended periods of near silence.

The LP comes with a cute little business card with a code for a digital download. The download is administered through Domino, who offer the option of downloading the album as a CD resolution WAV file. The download sounded fine as well, although I believe it was slightly compressed. The download-only bonus tracks are terrific. I had never heard the 7" version of "Fa-Ce-La" or the demos of "The Boy With The Perpetual Nervousness" and "Moscow Nights" before. What struck me about these versions was that although the sound quality and performances were cruder than the later versions, the arrangements were very much locked into place early. These versions also apparently date to a period before Glenn Mercer hit puberty, because he really sounds like an awkward teenage kid on these cuts with a far different voice than what would appear on Crazy Rhythms in 1980. (I guess if I want to hear the b-side version of "Raised Eyebrows" I will have to shell out for the Insound exclusive 7"). The live tracks from 2009 show the band has not lost a step in terms of energy and tightness despite the long hiatus.

For anyone bummed the cover of "Paint It Black" included on the 1990 A&M reissue was omitted from the new reissue, here it is:

Posted by Pete Bilderback at 9:19 AM 3 comments: