A few thoughts on Alex Chilton 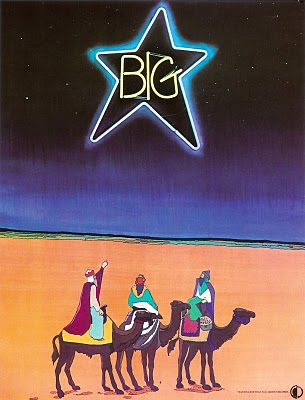 This image, from a 1973 Ardent Records seasonal promo poster, strikes me as both appropriate to the current moment and oddly prescient. On the one hand, we can look at it today and attach the clichéd "there's a new star in Heaven" meaning to it. It may be a cliché, but let's do it anyway: God bless Alex Chilton who gifted us with music more precious than gold, frankincense and myrrh (yeah, I don't know what those last two things are either).

On the other hand, the image can be interpreted as prophesy. The Big Star story is one of commercial failure followed by the band's gospel being spread posthumously by a select group of "wise men" (and women) including musicians like Peter Holsapple, Chris Stamey, Susanna Hoffs, Peter Buck, Paul Westerberg, Tommy Keene, Steve Wynn and Kendra Smith, music critics like Bud Scoppa and Ken Barnes, and just regular old music fans like me (and probably you too if you're bothering to read this). For years, initiation into the cult of Big Star consisted of elaborate rituals like the passing of dubbed cassette tapes among friends because the music was so hard to find in stores.

And yet despite all the posthumous success and critical acclaim, Big Star remains an under-rated band. As a case in point, just a couple years ago I picked up a pristine, original pressing of #1 Record at my local record store for only $20. When I asked the owner why he hadn't put the album on eBay he told me Big Star stuff never went for enough money to make it worth the bother. Can you imagine picking up a mint original pressing of The Velvet Underground's first album in a record store for $20? And #1 Record actually sold a lot less copies when it was first released than the V.U.'s debut (probably only on the order of 10,000 or so). For me--a person who usually shuns the idea of LPs as fetish objects--an original copy of #1 Record represented a kind of sacred talisman, a magical portal to an alternate universe where children by the millions sing for Alex Chilton. I could hardly believe I was seeing the real thing in front of me, let alone that I'd be able to take it home for a measly $20.

After Big Star, Alex Chilton embraced an aesthetic of anarchic spontaneous creativity on solo albums beginning with the remarkable Like Flies on Sherbert in 1979. In contrast to his work with Big Star, Chilton's solo work would be just as misunderstood by music critics as it was ignored by the record buying public. Nevertheless, Chilton's post-Big Star music was and remains a huge influence on a number of musicians (including Howe Gelb, Robert Pollard, Jon Spencer and Lou Barlow) who prioritize the beauty to be found in disorder and spontaneity over calculated studio fussiness.

I only saw Alex Chilton perform live once, at The Mercury Lounge in New York City during the mid-nineties. The show came after the Big Star "reunion," but what struck me about Chilton was how absolutely indifferent he seemed to Big Star's legacy, or even the legacy of his later solo career. What I remember most from the show was seeing a guy who was clearly born to perform and who was determined to live in the moment. He was the living, breathing embodiment of all that is best about rock 'n' roll, and our world is a poorer place without him.

Alex Chilton finally earned some of the financial rewards he deserved because another true believer, Ben Vaughan, was smart enough to recognize "In the Street" as the perfect theme song for a television show about teenaged suburban boredom set in the 1970s. I wasn't particularly a fan of That Seventies Show, but every time I happened on the intro while channel surfing I had to watch and smile because I knew it meant another dollar in the pocket of one of my musical heroes. Alex Chilton left us too soon, but the musical legacy he leaves behind is enormous, and I predict it will only continue to grow as the gospel of Big Star and Alex Chilton spreads and more true believers are converted.
Posted by Pete Bilderback at 10:31 AM 6 comments: