The Jayhawks (aka The Bunkhouse Album) Finally Reissued 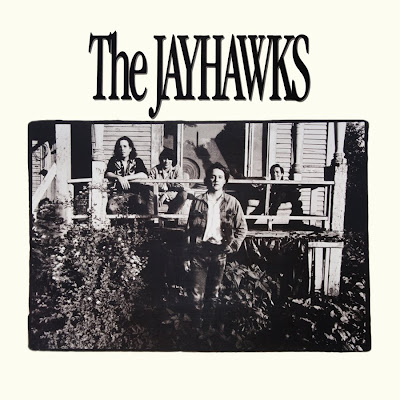 Lost Highway recently reissued the Jayhawks long-lost, self-titled debut on CD, LP and as a digital download. This marks the first time the album has been available in any form since its initial release on Bunkhouse Records in 1986 as a 2,000 copy limited-edition LP.

I hadn't heard anything about the reissue, but spotted the LP for a mere $10.99 in the new arrivals bin at my local record shop and picked it up. Honestly, I wasn't overly excited by the find and the record sat in my "to be vacuumed" pile for a week or so after purchase (yes, I even vacuum clean my new LPs). Why wasn't I excited to finally hear this lost-classic that is highly regarded among Jayhawks fans? I guess mostly because I wasn't aware that it was a lost-classic that is highly regarded among Jayhawks fans.

I first became aware of the Jayhawks in 1989 when I was serving as music director of my college radio station and Twin/Tone sent a preview copy of The Blue Earth. It's fair to say I liked the album. I immediately put it into heavy rotation and regularly played a few of the tracks on my own radio program ("Two Angels," "Five Cups Of Coffee," and "The Baltimore Sun" definitely caught my ear at the time). I liked the album enough to buy a copy for myself, but not enough to buy it again when Restless reissued it with bonus tracks several years later. And I didn't like it near as much as the albums the band released later on Rick Rubin's American imprint both with and without Mark Olson.

Despite some excellent songwriting, I found the consistently slow tempos dragged the album down, and some of the songwriting struck me as indistinct and too beholden to the band's obvious Gram Parsons influence. For me, The Blue Earth remains an embryonic version of the kind of music The Jayhawks would do with far more confidence and individuality in later years, and I assumed The Bunkhouse Album--recorded a full three years before the Twin/Tone release--would sound like an even more embryonic version of that. Also, let's face it, when a limited-edition first album by a band that eventually gains a sizable following like the Jayhawks stays out-of-print for nearly a quarter century, it's usually because the band has good reason to leave it collecting cobwebs in the attic. For all these reasons I had relatively low expectations for The Jayhawks. I assumed the album would be a curiosity worth a listen or two and little more.

All of which is to say that I was not prepared for the energy that comes pulsating out of the grooves of The Jayhawks' feisty debut record. Mark Olson's songwriting is already surprisingly sharp; highly tuneful county-tinged rockers like "Falling Star," "Let The Last Night Be The Longest," "People In This Place On Every Side," and "Let The Critics Wonder" quickly found their way into my head and stayed there. There are a few places where Olson succumbs to easy country cliches ("The Liquor Store Came First") and some tracks sound like filler ("Cherry Pie"), but these tracks never slow things down enough to blunt the album's overall impact. Olson and Louris had already found a comfortable way to harmonize, although at this point Olson is clearly the group's leader (a fact reinforced by the cover photo that depicts Olson standing in front of the rest of the band lounging on a porch behind him) with Louris confined to the role of guitar picker and back-up singer. The production is predictably rough, but it never gets in the way of the music either.

What struck me the most however, is the fact that Gary Louris' guitar playing positively rips, and drummer Norm Rogers (later of The Cows) keeps things moving along at the kind of peppy pace that is altogether absent from the more contemplative The Blue Earth. To my ears, The Jayhawks has more in common with an album like The Long Ryders' raucous Native Sons than it does with the overly-mannered Blue Earth, and I regard that as a very good thing. If I had been one of the lucky 2,000 to hear this album when it was released in 1986, I probably would have become a big fan of the Jayhawks sooner than ended up being the case.

I admit that this is still a somewhat embryonic effort, and The Jayhawks would find a better balance between fast and slow tempos on Hollywood Town Hall and Tomorrow The Green Grass. Also, both Olson and particularly Louris' songwriting would mature in the passage of time, and Rick Rubin at American would spend a lot more money recording their albums than their then manager Charlie Pine could muster at Bunkhouse Records (a label he founded specifically to release this album). Nevertheless, The Jayhawks (aka The Bunkhouse Album) is a very promising debut album from a great band that can also proudly stand on its own merits twenty-four years after its initial release.

Update: No Depression is running a contest to win a signed copy of the LP and CD. You must be a registered No Depression user and leave a comment listing your five favorite Jayhawks songs in order to enter.
Posted by Pete Bilderback at 10:17 AM

BTW, I was one of the winners of that No Depression contest, so congratulations to me!