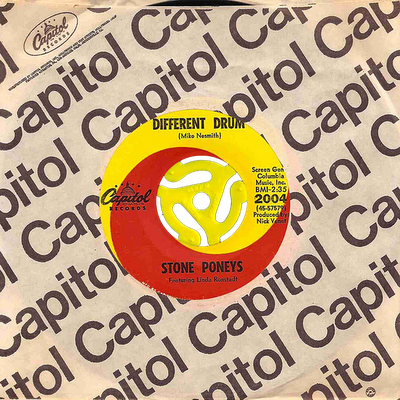 I remember hearing "Different Drum" by The Stone Poneys (featuring a young singer named Linda Ronstadt) on AM radio a lot when I was a kid. Released in 1967, the Stone Poneys' version of the song would not have been new at the time, but it would not have been old enough to be an "oldie" either. As far as I can remember our local AM station (WNAV in Annapolis) did not change their heavy rotation very often. When they found a song they liked, they stuck with it for ten to fifteen knots years.
I have a specific memory of hearing the song in my Mom's old Rambler station wagon (the Rambler only had AM radio) and being intrigued enough by it to ask what the lyrics were about. My Mom explained the meaning of the saying "marching to the beat of a different drummer," and told me the song was about two people who had different outlooks on life so their relationship couldn't work. The concept made an impression on me, and although I think I understood the metaphor, somewhere in my childhood mind I still had a vision of two people marching in different directions followed by two different drummers playing a different beat.

"Different Drum" was penned by Michael Nesmith of the Monkees, but never recorded by his band (although I have the feeling some knowledgeable Monkeeologist will chime in to tell me that in fact the Monkees recorded an unreleased demo of the song during the Pool It sessions). The first recording of the song to be released was by folk revivalists the Greenbriar Boys for their 1966 album Better Late than Never! on the Vanguard label.

Written and sung from the male perspective, the song is a gentle kiss off with an age old theme; boy meets girl, girl wants to settle down, boy wants to sow his wild oats, relationship ends. This is not to say that in this form it's not a good song; the lyrics are well constructed and the melody is highly memorable. But in this first version it's not a zeitgeist capturing song as it would be when Ronstadt interpreted it, and it wasn't a hit. Nevertheless, "Different Drum" in its original version (or as sung by Ronstadt or later Nesmith himself in a country-rock style) is as good a riposte as any to the critics who claimed the Monkees had no "real" talent of their own. "Different Drum" is as good as, or better than, the tunes the hired Tin Pan Alley guns were writing for the Monkees at the time.

As such, an interesting dynamic has evolved as the song has been interpreted and re-interpreted by different artists over the years. As previously noted, in the versions by the Greenbriar Boys and later Nesmith, the song has what you might call a traditional gender dynamic; it's sung from the perspective of a male who doesn't want to commit to a female who is looking for stability.

But it's a totally different song when a woman sings it. Ronstadt turns the tables on the boy, and now it's the girl who wants to sow her wild oats while the boy just wants to settle down. Further, the object of Ronstadt's lack of affection ends up being feminized by the gender shift; he's "pretty," and he "cries" and "moans" over the end of the relationship. But at the same time, there is a slightly more sinister connotation to the lines about trying to "pull the reins in" then when it was sung by a male lead. As sung by Ronstadt, "Different Drum" implicitly becomes a song about casting off the shackles of traditional gender roles.

This sexually liberated female perspective was not often heard in popular music up to that point, and the song makes Ronstadt something of an archetype shattering figure. Neither virgin nor whore, she's simply not ready to settle down and sees no reason why she shouldn't enjoy herself until she is.

It should be noted that this shift in popular culture was made possible to a large degree by the introduction of oral contraceptives to the U.S. market in 1960, which for the first time in human history made it possible for choices about reproduction to be easily and reliably made solely by the woman. Female contraception (despite repeated attacks on it by reactionary forces) is so taken for granted today that it is easy to forget the extent to which "the pill" helped revolutionize gender relationships in the later half of the twentieth century. It is within that context that in Ronstadt's hands "Different Drum" becomes more than just a break up song, but also a celebration of liberated female sexuality.

For my money the most interesting of the later covers of the song is the 1990 version by the Lemonheads off their Favorite Spanish Dishes EP. Evan Dando sings the lyrics exactly the way Ronstadt did in her 1967 hit version, declining to shift back to the traditional male gender role as most male singers do when covering it. It's an interesting decision, and it creates layers of gender ambiguity in the song. By addressing the song to a "boy" is Dando singing the lyrics from the female perspective? Is he singing it one gay man to another? Or is it sung from the perspective of a straight man declining the advances of a gay man (maybe that's what he means by traveling to the beat of a different drum)? All these things are left ambiguous by Dando's choice of gender pronouns. These qualities are amplified by the the image Dando projected during the early 90s: Young. Pretty. Self-destructive. Sexually ambiguous. All of these elements collide in the song to create a fabulous artistic tension that is missing from other later-day covers such as the very nice versions by The Pastels and Matthew Sweet & Susanna Hoffs (who stick pretty closely to Nesmith's and Ronstadt's interpretations respectively).

I'm sure all of these thoughts were far from my mind as I enjoyed listening to the song in the back seat of my Mom's Rambler sometime during the early 70s. But there is little doubt in my mind that it was AM radio staples like "Different Drum" that sparked my life-long love of popular music.
Posted by Pete Bilderback at 5:59 PM

Actually, I wrote this post despite a vague fear that you would weigh in with a snarky comment about how ignorant I am for not knowing about the Monkees' unreleased demo of "Different Drum" from the Pool It sessions.

Growing up a fan of the Monkees (despite being born around the time their show was going off the air) I learned about this song's Nesmith origin fairly early, and as such I'd long attributed Ronstadt's gender reversals to be merely what was expected for a female singing a song written for a male. However, your argument has made me realize it may not be that simple. Very well done.

Hi Doug, it may be that the decision to change the gender pronouns was as simple as following convention--I suspect that was the case. However, that doesn't change the fact that the gender switch changes the meaning of the song in some important ways. It's just not the kind of female perspective you would have heard on the U.S. pop charts even just a couple years before.