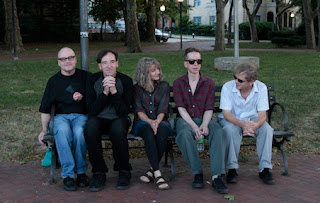 If you've followed this blog for long you know that I am very excited about the fact that The Feelies have reunited and have recorded a new album. With recording completed some details about the new album, Here Before, have emerged:


Legendary NJ avant-pop the Feelies have announced 2011 tour dates which will follow the release of a new studio album. After a 19 year break, the Feelies are back with Here Before an album of all new original material on Bar/None Records. The new album touches on different styles from the Feelies’ long history while adding new grooves and musical ideas to the mix. Electric and acoustic guitars melt together in archetypal Feelies fashion on songs like "Nobody Knows" and "Should be Gone." Elsewhere there are slabs of driving garage rock like "When You Know" and  "Time Is Right" and the down-tempo "Bluer Skies," and harmonically rich  "Later On."

Here Before was recorded at Water Music in Hoboken, New Jersey produced by Feelies founders Glenn Mercer and Bill Million. Besides Glenn on rhythm/lead guitar and lead vocals, and Bill on guitar and vocals, the album features Feelies mainstays Brenda Sauter (bass, vocals), Stanley Demeski (drums), and Dave Weckerman (percussion). The album will be released digitally as well as on CD and vinyl with a download card.

The release date for Here Before is 04/12/2011, which coincidentally is the same day as the Labour of Lust LP reissue. You can hear a preview track, "Should Be Gone," right now at Pitchfork. Life is good.
Posted by Pete Bilderback at 8:15 PM

Email ThisBlogThis!Share to TwitterShare to FacebookShare to Pinterest
Labels: feelies

Not to miss the point and go off on a tangent, but the allusion to "avant-pop" in the press release really make me think: There's a sub-genre called "avant-pop"? I'm not saying it's inapplicable (and I recall from my brief tenure reviewing CDs for the college paper that the press releases seemed composed by frustrated creative writing majors), but it reminded me of why I stopped trying to keep up with the industry and just liked the music.

Yeah, I have no idea what avant-pop is, and if it is a real thing, I doubt it applies to the Feelies. But I sure am looking forward to hearing the new album.