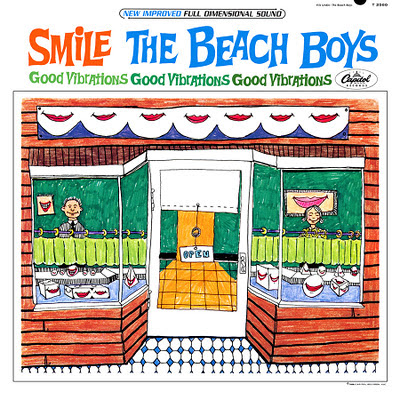 After a forty-four year gestation period, Capitol records will release the Beach Boys' SMiLE Sessions tomorrow in a variety of configurations ranging from a two CD set, a two LP set, a box set with five CDs, two LPs and two 7" singles, not to mention a super-deluxe set that includes your own personal SMiLE surfboard signed by the surviving members of the band.

How much SMiLE do you need? Since I don't surf, I settled for the two LP set (my local record shop had a few copies out early). Sides one through three are the album as it has been pieced together by Mark Linett and others, and side four presents a few alternate stereo takes. I know some people derive great pleasure from listening to various tracking sessions, demos and alternate versions of songs, but I am not one of those people. Personally, I am very grateful to people like Mark Linett for doing the painstaking work of editing this material into something coherent.

From what I understand, piecing together the finished product in ProTools was an incredibly arduous task, so it is no wonder that Brian gave up in frustration in 1967 with only scissors and tape at his disposal. Much has been written about Brian's deteriorating mental state in 1967, as well as resistance from certain factions within the band, but in my opinion what it comes down to is the fact that the music in Brian Wilson's head in 1967 was about forty years ahead of the technology necessary to complete it.

Much ink has been spilled about SMiLE over the years, and the release of something like a complete, finished version will no doubt spark much further conversation: Is this really what Brian would have released if had finished the album in 1967? Would the album have been hailed as a masterpiece or received as a curiosity? Would it's legacy loom as large if it had not had the aura of "lost masterpiece" surrounding it for so many years? How would the Beatles have responded to SMiLE? What would it's influence have been had it been released in 1967? Would we have still had to suffer through the Doobie Brothers and Journey, or might popular music have gone in an entirely different and more interesting direction? As fun as it is to speculate about such things, I'll leave debate about questions that can't possibly be answered to others.

I do have a couple things to say.

First, the vinyl pressing of this album is exceptional. That is not always the case with Capitol, but they wisely outsourced the cutting of the vinyl lacquers to Chris Bellman of Bernie Grundman mastering, and Chris is one of the best in the business. I don't know where the lacquers were pressed, but vinyl quality itself is also excellent, virtually free of surface noise and pressed (on center) on heavy weight vinyl. The packaging is absolutely beautiful, and the set is also reasonably priced at around $25 (less than average for a 180 gram double LP). I have no reservations whatsoever about recommending the vinyl version.

Second, I just want to say that I am so happy for Frank Holmes, the artist who created the cover image for the album, to finally have his work available the way it was meant to be seen. I talked to Frank a few years ago about the SMiLE artwork. Frank is a lovely and diplomatic person, but even after the passage of so many years I could hear in his voice how heartbroken he was about the fact that Capitol destroyed the covers they had printed up for the album. I did not detect a hint of bitterness in Frank, but he still sounded devastated by that loss. I don't know how he felt about the fact that Brian went with different artwork for Brian Wilson Presents SMiLE in 2004, but I'm glad that his legendary album cover is now actually, finally, an album cover. I hope Frank has a big smile on his face today. I know I do.
Posted by Pete Bilderback at 12:40 PM 2 comments: