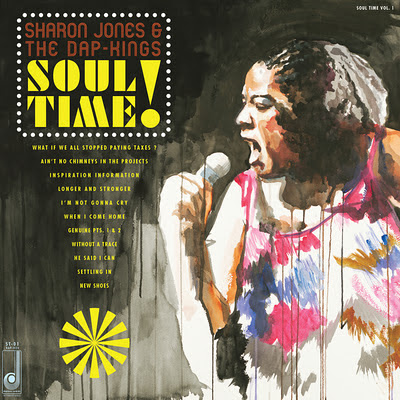 The main thing that caught my eye was a limited edition Sharon Jones album, Soul Time!, which purports to represent the funkier side of Sharon Jones and the Dap-Kings (does Sharon Jones have a side that isn't funky?). It's an odds and sods type compilation featuring some previously released singles, b-sides, compilation tracks, as well as studio versions of some previously unreleased live favorites. Two of my favorites are a very funky cover of Shuggie Otis' "Inspiration Information," and the Christmas song "Ain't No Chimneys In the Projects." "Chimneys" is far more than a Holiday novelty song, as it beautifully recognizes and honors the struggles and sacrifices made by a working, single mother to make Christmas a special for her daughter.

Luckily my local record shop had a few copies on LP (somehow buying Sharon Jones on CD seems wrong). The packaging is beautiful and the record was nicely mastered at Golden Mastering and well pressed to standard weight vinyl. Despite the disparate sources, the whole album holds together nicely. My only complaint? Where is their blazing cover of Kenny Rogers and the First Edition's "Just Dropped In (To See What Condition My Condition Is In)"? The small print on the cover calls this "Vol. 1," so hopefully it will show up on Vol. 2.

Soul Time! is limited to 5,000 copies on LP and 20,000 on CD, so get up, get out, get into it, and get yourself to your local independent record store.
Posted by Pete Bilderback at 1:22 PM No comments:

With Thanksgiving Day just around the corner, I think we should all take a moment to be thankful that Paul Weller is alive and kicking and still making relevant music in the year 2011.


Paul Weller will release a new solo album, Sonik Kicks, on March 26th, 2012, and his management has kindly made a preview track, "Around The Lake," available for download.

"Around The Lake" has a heavy psychedelic feel to it with Krautrock overtones, and in my opinion it sounds like Paul could still teach some of these young kids a thing or two about how to rock out. Paul hasn't sounded like an angry young man for quite some time now, but we can be thankful he doesn't sound like a toothless old geezer either (unlike yours truly, who will be thankful if he is able to digest turkey this year rather than being spoon-fed gruel).


I get emails all the time from established and new acts asking me to post a track, and I rarely judge the music interesting enough to post here. (That's not to say the music is inherently uninteresting, it just usually doesn't catch my ear). This is different. Check it out, and Happy Thanksgiving.
Posted by Pete Bilderback at 11:47 AM No comments: 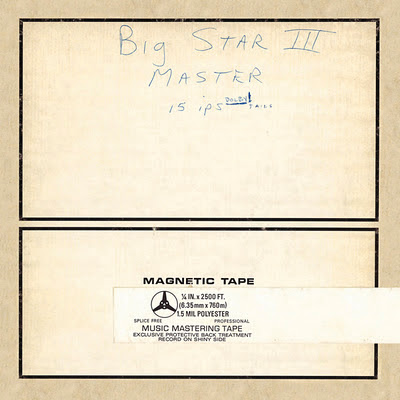 If you missed out on scoring a copy of Omnivore's test pressing version of Big Star's Third on Record Store Day, you have a second chance. Omnivore has 500 copies pressed on clear vinyl available for sale exclusively at their web store. The price is steep (in my opinion) at $60, but that is much less than you would pay for a copy on eBay.

I was lucky enough to score a copy in store on Record Store Day, and I don't remember paying that much for the black vinyl version. But I know many were not so lucky, as this was one of the most in-demand Record Store Day items ever (and for good reason). I can practically hear the wailing and teeth gnashing of vinyl hoarders who camped out on Record Store Day about the unfairness of it all. Don't shoot the messenger, I'm just passing along the news to those who might be interested.

This an amazing album and package, and the sound quality is outstanding. It's hard for me to imagine a fan of Big Star not wanting this in their collection.

I also see that Omnivore has a CD and "digital LP" of Richard Thompson's long out-of-print instrumental album Strict Time available for pre-order. I wrote a bit about this album a while ago, and it is gratifying to see it returning to print after having been unavailable for too long.
Posted by Pete Bilderback at 2:04 PM No comments: