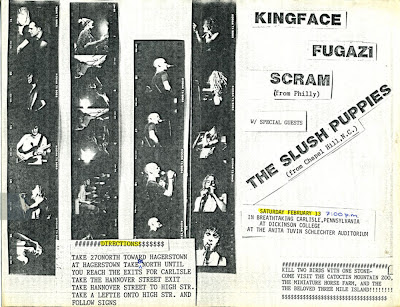 This is from today's post at the WDCV tumblr blog, and I noticed the date was exactly 24 years ago today. This show happened during my freshman year at Dickinson, and was booked by my friends David Brower and Michael Lenzi. Four bands for $3. Adjusted for inflation this would work out to about $5.70 today. Still, not a bad deal.

At the time Fugazi had yet to release their debut EP. Kingface was another D.C. area post-hardcore band, you can hear them on Dischord's State Of The Union compilation LP. SCRAM was white-boy ska/reggae act from Philly. The Slush Puppies featured a pre-Superchunk Mac McCaughan. They showed up selling a really cool box set of 7" singles called "Evil I Do Not" with contributions from other North Carolina acts like Wwax, Egg Egg, Black Girls and Angels of Epistemology. I foolishly sold my copy on eBay when I was in grad school because I needed to eat or something. If anybody has a copy, let me know, as I'd love to hear it again.
Posted by Pete Bilderback at 5:27 PM No comments:

My old college radio station, WDCV at Dickinson College in Carlisle, PA, has started a tumblr blog to document the station's history in honor of its 50th anniversary year. Brenda Landis, the station's advisor, has posted some really interesting artifacts there, including audio from a radio show I did back on February 16th of 1989 (almost 23 years ago to the day).

Here is my playlist for the evening:

Listening to this today is a little embarrassing, especially when I hear my younger self introducing a song by Chris McGregor's Brotherhood of Breath as "sort of a, um, a jazz inflected, um, with reggae type music." Ouch. Perhaps the reason I spoke so little during this program was because I was following Abraham Lincoln's dictum that it is "better to remain silent and be thought a fool than to speak out and remove all doubt." Unfortunately, I said just a few words too many that evening to leave room for doubt. But I have to remind myself I was only 19 years old at the time, and even if I didn't know how to describe it, I was at least adventurous enough to play Chris McGregor's music alongside such typical college radio fare as Elvis Costello and XTC.

Some of the music I played on that night I still listen to today, some of it I don't even remember. On the whole, the program is probably a decent snapshot into what was going on in college radio during the late 80s. By this time R.E.M. had become platinum sellers thanks in part to support from college radio, and major labels were starting to look to college radio as a sort of "farm system" where they could break artists before pushing them to larger commercial stations. Further, the spread of industry trade magazines like CMJ were helping to establish an identifiable "college radio" sound, while at the same time homogenizing the medium to some degree.

For myself, at the time, I just thought I was just playing some music I liked, maybe exposing people to stuff they hadn't heard before, and most of all having fun. Thanks to Brenda for finding room on the internet for this little time capsule. I hope you enjoy it.
Posted by Pete Bilderback at 12:15 PM 5 comments:

Sharon Van Etten released her third album, Tramp, this week on the Jagjaguwar label. I'm still digging into the album, so this isn't a formal review so much as a heads up that Sharon is an artist I think you should check out. Fans of various dreampop bands like Opal, Mazzy Star, Galaxie 500 and Beach House will no doubt find a lot to like about Sharon's music, as will fans of various "confessional" female singer-songwriters. But I think Sharon's music, though obviously indebted to both these genres, has the ability to speak to those who are not necessarily fans of either type of music.

What sets Sharon apart, to my ears, is her voice. She is able to project a kind of power and authority through her vocals that is rare in either the dreampop or confessional songwriter arena. There is a muscularity and confidence to her singing that not many vocalists are capable of, and is perhaps at odds with the introspective, wounded-by-love nature of her lyrics.

I don't know, but if I had to guess I would say that Sharon has had some formal voice training at some point in her life. She seems at all times to know not only what she wants her voice to do, but more importantly to have an innate sense of what she wants her voice to do to the listener. My suspicion of formal voice training should not lead you to the conclusion that her voice is overly pretty, or her delivery mannered or showy. On the contrary, Van Etten is not afraid to let the rough edges of her voice show, it's just that she seems to have a sense of control over her voice that is all too rare in the indie rock arena.

Tramp is well worth checking out, as are her previous albums Because I Was In Love and especially Epic.  Amazon currently has the MP3 version of Tramp available at a special low price, and the track "Serpents" is available as a free download.
Posted by Pete Bilderback at 10:59 AM No comments:

I just wanted to pass the word along that one of the bands I wrote about previously, The Popes, are having a reunion show this weekend.

The Popes will be playing their first live show in 20 years this Saturday, February 4 at Local 506 in Chapel Hill, NC.

As I said in my original post on the Popes:


Hi, We're The Popes neatly encapsulates everything that was fun, nice and good about late 80s collegiate rock, and if I wanted to explain what the whole thing was about to some alien ethnographer, I could do worse than simply hand them a copy of this EP.

I'm sure the show will be a lot of fun, and if I lived a little closer to Chapel Hill, I'd be there. If you're in the area, check it out, and please report back here.

Also, sorry for not having posted more lately. I've not been feeling particularly inspired to write lately, and Spring semesters are usually pretty busy for me. I've got a few ideas kicking around in my head, but so far they haven't materialized into posts.
Posted by Pete Bilderback at 10:05 AM 5 comments: