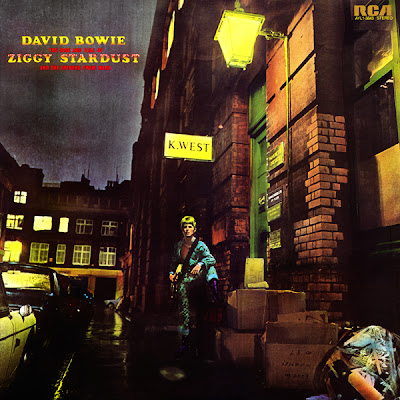 **UPDATE** Deal has ended. Price is now $5. It's possible this was another of Amazon's pricing glitches, and not a promotion.

Amazon is giving away a free MP3 download of the entire 40th Anniversary remastered version of The Rise and Fall of Ziggy Stardust and the Spiders From Mars today.

This 40th Anniversary edition was digitally remastered by Ray Staff, the original mastering engineer for Ziggy at Trident Studios and Ken Scott, the album's original co-producer. In my opinion, even as an MP3 this new remaster sounds better than the most commonly available CD versions (1990 Rykodisc and 1999 Virgin remaster).

Just remember to play at maximum volume.
Posted by Pete Bilderback at 3:48 PM

Wow. I guess I better grab it then, right?

Cracks me up that the album is referred to as "[Remastered] (Remastered)".

Now why haven't they ever given Hunky Dory a deluxe treatment?

Yeah, [Remastered] (Remastered) is a good one. I don't even know how many times they've remastered Ziggy in the digital age.

I have not heard every version (SACD, early RCAs, etc.), but this one is a lot better than the two that are easy to find.