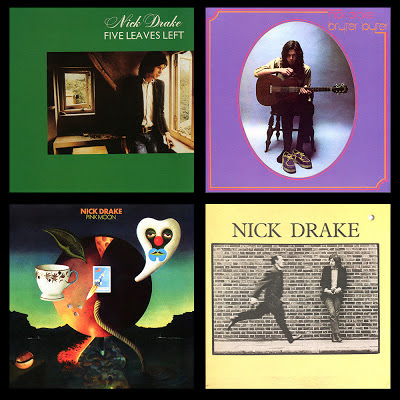 Bryter Music and Universal are in the process of reissuing Nick Drake's core catalog on vinyl. I am happy to report they are doing an exceptional job.

A couple years ago I sent an email to Martin Calliman (aka 'Cally') asking that he consider reissuing Nick's catalog on high quality LPs. I was pleasantly surprised that he wrote me back. It was clear from my email exchange with him that he is not a vinyl "true believer." Nevertheless, it was a refreshing correspondence because it is rare to hear someone in the industry speak so frankly. Perhaps my email, along with those from many other vinyl enthusiast Nick Drake fans, convinced Cally that a vinyl reissue campaign might be worthwhile after all.

So far, Bryter Layter and Pink Moon have been issued as both deluxe sets with bells and whistles, as well as reasonably priced standard vinyl reissues. A deluxe box of Five Leaves Left is due out at the end of the month, to be followed by a standard issue vinyl LP. Universal also issued a Record Store Day version of the self-titled compilation that was Drake's debut release in the United States.

While the boxes look to be of very high quality, I opted for the standard reissues. From what I have gathered the mastering on the deluxe and standard titles are identical.

So, how do they sound? In short: fantastic.

I had a much sought after and highly praised U.K. first pressing of Pink Moon on loan (I could never afford one) for several days and compared it to the new reissue. I don't go in for a lot of precious audiophile language, but the reissue sounded at least as good as the original to me. I'm sure someone with a $50K turntable will show up to tell me I'm wrong, but for normal folks the differences in sound quality (other than the fact that the reissue was quieter) are not going to be important.

I also own a U.S. Antilles pressing of Bryter Layter, and I preferred the sound of the new reissue to it. Likewise, the self-titled album sounds wonderful to me although I have nothing to compare it to.

I've seen conflicting accounts as to whether these were all cut from the original master tapes or not. It appears Pink Moon, at the very least, was. I'm not sure how much it matters. Original engineer John Wood has remastered these titles with great care, and with obvious respect for the sound of the original vinyl releases. They sound and look brilliant, and if you are a Nick Drake fan with a turntable these are easy to recommend.

Bryter Music, Martin Calliman, John Wood and everyone involved in this reissue program are to be congratulated for getting it right.
Posted by Pete Bilderback at 12:01 PM

My introduction to Nick Drake came via a late '80s pressing of the Fruit Tree box -- one of the best purchases I ever made.

While I like the care that seems to have gone into putting together these new editions, I simply can't afford them, not while my LP box (and mid-'90s Ryko CD version) is still playable.

However, I do get a kick out of the download included with each, of a needle drop from Nick's own copies.

I first picked up the Heaven In A Wildflower LP, then probably bought Fruit Tree the next day. This would have been circa '85-'86 or so.

If you care about sound quality, my advice would be not to pass on these. The box set versions are pricey but the standard editions are only about $25 (not cheap, but more or less standard for high quality reissues). For most the Ryko box sounds good enough...sometimes I wish I was a little more able to accept good enough.

I'm not quite sure what to make of the needledrop downloads. They sound awful. Very, very noisy and distorted. I get the sense they came about out of Cally's sense that vinyl is mainly a fetishistic thing. Perhaps they appeal to some. It is hard for me to imagine listening to them all the way through by choice.

I neglected to mention that these also come with hi-rez digital downloads (24/96). These are a bit of a mixed bag, IMO. It does not seem the same care went into these as the LPs. The files that came with Bryter Layter do not seem to have been properly mastered. Peak volume on these is around -10 dB. The BL digital tracks on the s/t album have the same volume issue, which makes them much, much quieter than the FLL tracks. I fixed this by normalizing in an audio editor, but I still felt the sound of the hi-rez digital tracks was underwhelming.

The real show is the LPs themselves, and they are excellent.