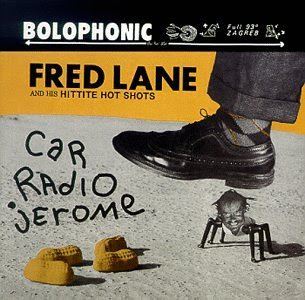 I can still remember the day Car Radio Jerome by The Rev. Fred Lane arrived at our college radio station. Previous Shimmy Disc releases from arty New York weirdos like Bongwater, B.A.L.L. and King Missile had impressed me and found their way into the station's heavy rotation, much to the annoyance of some of students at our small, conservative, liberal arts college.

Most of the stuff on Shimmy Disc was weird, but The Rev. Fred Lane was from a whole different universe of weirdness. This wasn't arty, affected, New York "weird," this stuff was strange and compelling in a way that was more in line with the work of "outsider" artists like The Rev. Howard Finster or Henry Darger. While the music was too sophisticated and knowingly strange to have been made by an illiterate janitor who stashed tapes in his dresser that no one knew he made until his landlady found them, it was clearly made by someone on the "outside" who wasn't looking for a way "in."

The album threw absurdist humor, an Elvis fixation, demented swing music, Rahsaan Roland Kirk, rockabilly, and lounge music into a pop-culture blender. It was pretty obvious to me that the "Rev. Fred Lane" was some sort of pseudonym. The back cover featured photos of what I assumed were imaginary albums by the Reverend with titles like How's That Oil? Vol. II, and From The One That Cut You, mixed with covers for real albums by the likes of Pat Boone, Frankie Laine, and album covers by imaginary artists like Ron 'Pate's Debonaires and Nervous Tension Headache McPherson.

Or at least I assumed this stuff was imaginary. It was possible the covers referred to real albums—it was hard to tell. Could it be that there was some strange, alternate musical universe that I was previously completely unaware of? It didn't seem likely, I was pretty up on the world of strange music—I knew about The Residents, I knew about Jandek. But maybe Fred Lane and these other guys had been self-releasing albums for years and this was the first one picked up by an actual record label. Maybe this was something that had flown well under my radar.

My curiosity was aroused, so I called up Shimmy Disc owner Kramer. I had previously interviewed him for an article in our school newspaper about his multiple jobs as a producer at Noise New York, musician in several bands, and owner of Shimmy Disc. In the article I called him a Renaissance man and a genius. It was the last thing I was allowed to write for the school paper.

Kramer and I chatted for a few minutes. He told me he was working on another album with Galaxie 500. (For some reason he never asked me if we actually played the records he sent.) After a while I told him I loved the Fred Lane record, and thought it was weird even by Shimmy Disc's standards. "Yeah," he said, "cool, huh?" "Yeah, it's great," I replied, "but tell me who is The Rev. Fred Lane really, and what's the deal with all the album covers on the back?" The line went quiet for about ten seconds, and when he replied the earlier friendly tone in his voice was gone, and in an icily serious voice he said, "I'm sorry, I'm not at liberty to divulge that information."

Was he serious? He couldn't tell me who The Rev. Fred Lane really is? We were talking about music, not Iran-Contra. "Come on man," I said, "don't be like that—you gotta give me something." After a few minutes of pestering he relented, "I've already said more than I should, but if you want to know more, show up at KKs on First Avenue between 11th and 12th Street at 2:30 AM. Order a bowl of borscht with two eggs. When the waitress brings you the check tell her 'the one that cut you' sent you."

All right, now this was really getting strange. I figured he had to be pulling my leg. "Dude, you gotta be kidding," I said, "I'm in freakin' Carlisle, PA. New York City is over four hours away. I have a midterm tomorrow." "Do you want to know or not?" he replied. Something in his voice told me he was serious. "Do what I told you and all your questions will be answered."

I really didn't think about it much. I went back to my apartment and "borrowed" $20 for gas money from my roommate [Adam—someday I intend to pay you back, sorry about that] got in my Subaru and headed for New York City. I listened to dubbed a cassette of Car Radio Jerome the whole way. It was almost 2:30 by the time I got to the city.

I went to KK's, a grungy little Polish restaurant in the East Village. I did exactly what I was told. I ordered a bowl of borscht with two eggs. The waitress was a pretty woman in her mid-thirties with a heavy Eastern-European accent. When she brought the check I was rather embarrassed, but said, "The one that cut you sent me." I was half expecting her to freak out on me and have me thrown out, but in a very blasé voice she said, "Okay, just a minute, I get it." She came back with a two hundred page mimeographed manuscript. It still had that slightly sickening fresh off the mimeograph smell. I looked at it for a second. "This isn't even in English," I said, "What language is this?" "It's Esperanto," she said. "But I don't speak Esperanto," I protested, "Nobody does." "You're smart boy" she said, "You'll figure out."

Posted by Pete Bilderback at 7:16 AM

I talk to my haircut.

To be continued WHEN???????
How can you cut off a story like that?
I'm going to be going crazy until I read the rest of it.
Not going to be sharing laughs, as the urine passes through.
No fun in the fundus with you.

Not until I get the rest of the story!
(Thanks for telling it! I've been re-listening to my Fred Lane lately and doing desperate internet searches for info on him and came across your blog--
Have you heard 'bout the documentary thats in the works?)

Hi Elizabeth. Thanks for stopping by. Part II (of how many, I don't yet know) should be up this week.

I am aware of the documentary. It looks interesting...hopefully it will be available soon, as I imagine it will add a lot of information to what is commonly known.

I'm glad to see some interest in the good Reverend building.

I don't even believe Kramer exists.