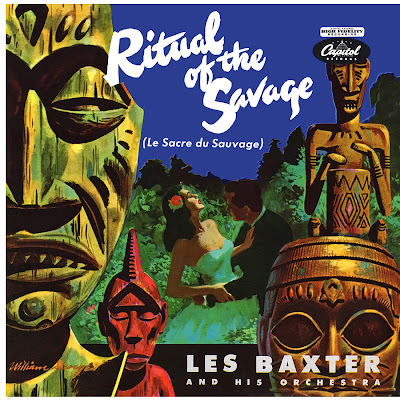 This one was certainly worth it for more than just the album cover. But what what an album cover it is. Take a moment to appreciate the composition: a modern couple donned in formal attire embrace in a garden framed by large "primitive" idols. But take a closer look at the couple. Are they embracing, or is the woman rebuffing an unwanted advance from her male partner? Perhaps she is trying to control her mate's savage instincts. Or perhaps he simply failed to set the proper mood for their romantic interlude. If only he had played his copy of Les Baxter's Ritual Of The Savage for her, the evening might have ended differently. Should Baxter's elegant exotica have failed to arouse her inner savage, he could always have pulled out his copy of Jackie Gleason's subtly titled, Music To Change Her Mind. 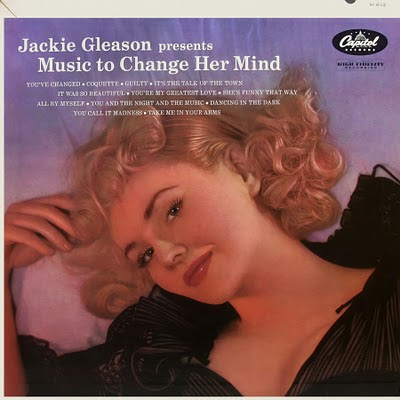 Gleason's album is a sophisticated variant of what was known as "mood music," soothing instrumental takes on standards such as "Dancing In The Dark" and "You And The Night And The Music." But why should the desperate bachelor of the 1950s turn to Les Baxter's mix of melody and jungle rhythms for romantic help?

The genre of "exotica," of which Baxter's album is arguably the first album-length example, is a complex cultural phenomena that I could not hope to unpack here. If I really wanted talk seriously about exotica, I'd have to touch on Freud, Social Darwinism, colonialism, and the specific post-war historical circumstances in which the genre became popular. But, fortunately for you, I do not want to talk about exotica seriously.

Instead, I would caution against taking an album like Ritual Of The Savage too seriously, as the exotica genre was surely full of a lot of tongue and cheek humor. For the hipster of the 1990s (yours truly included), the rediscovery of 50s exotica provided a welcome respite from the increasingly humorless onslaught of grunge. But not all of the revivalists may have been aware that the progenitors of the genre were in on the joke as well.

Consider this Capitol Records promotional document for Ritual Of The Savage (subtitled, no doubt in a nod to Stravinsky, Le Sacre du Sauvge) from 1951 that I discovered on the I'm Learning To Share blog:


The premise is a parody of the Hollywood "excursion" films that were popular during the 1930s, with Baxter as "Serge Drek" who guides steel wool heiress Griselde Kittle (Dottie O'Brien) into the heart of Africa in search of her missing sister, who may or may not be the fabled White Goddess (Gisele MacKenzie). Clearly no one involved with this album was taking the concept too seriously at the time.

Fortunately, a highly refined sense of irony is not necessary to appreciate the music contained in the grooves of this record. Kitsch value aside, the melodies that adorn such compositions as "Quiet Village," "Jungle Flower," and "Kinkajou" are gorgeous, and the propulsive African-style percussion really does create a sense of excitement that is missing from much of the other "mood music" of the period. Highly recommended. The album is available for download at the usual places, as well as packaged as a CD-twofer with another Baxter album, The Passions, on the Rev-Ola label.
Posted by Pete Bilderback at 12:00 PM 1 comment: 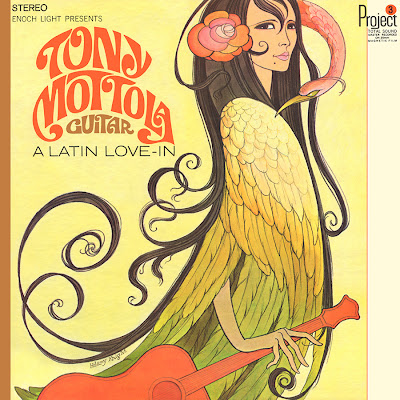 Maybe some people could pass on picking up a record with a cover like this, but I am not one of those people.

This one was worth grabbing for more than just the cover. Tony Mottola was a very sensitive guitar player (he did a number of recording dates with Sinatra, and was a member of his touring band in later years). The orchestrations are brash and over-the-top in typical Enoch Light fashion. If you are not too hung up on the idea of "good taste" this is a very fun album to listen to.

As far as I can tell this was never issued on CD, but somehow it is available on iTunes.
Posted by Pete Bilderback at 11:35 AM No comments:

Some time ago I posted news that YepRoc would be reissuing the Soft Boys' 1980 classic album, Underwater Moonlight, on LP. At the time I passed along information in good faith that was provided by YepRoc via email that turned out to be inaccurate, and I feel a responsibility to set the record straight.

At the time of my original post in November of 2010, the LP release had been delayed, and YepRoc passed along news from Robyn Hitchcock that explained the delay and described the recut version. After having purchased the LP, it is apparent to me that the information provided in that email does not describe the final product that YepRoc brought to market. The full text of that email is provided below:

Many apologies for the delay in getting the latest A Can Of Bees and Underwater Moonlight out to you. The LP test-pressings were sent over for Morris Windsor to check (as he has both a record-deck and ears that work well) and he felt that the cut was inferior to the originals (which he also has). We had been mastering from the 1993 DAT tapes, as the best reference source for these old recordings.

However, in the course of our conversations, Morris discovered an original production master (copy of the original mixes) of UM deep in his attic. This transpired to have the long-missing version of Old Pervert that graced the 1980 release of UM, amongst this uniquely surviving set of 1/4" mixes. This was like finding an ashtray in a pub these days: enchanted and wicked. So Morris FedExed (yes, it's a verb) the tape to the management office in LA where Richard Bishop (who had released the original UM 30 years ago on Armageddon Records) had the tapes baked. They go into a kind of pizza oven to prevent the ferric oxide falling off like liquorice.

At this point we decided to re-cut A Can Of Bees from a pristine vinyl copy. This was supplied by Geoffrey Weiss, a long-term music supporter in the quagmire of showbusiness; Geoffrey also kindly supervised the cut, along with Richard. The re-cuts were FedExed back to Morris who pronounced them very good. Morris is not given to hyperbole, and I have always favoured his judgement, when he gives it, over my own.

YepRoc have patiently waited for the improved LPs, and done their best to reassure anxious purchasers of these items who paid for them a while back and have seen nothing yet for their money. If you are amongst them, please again accept my apologies on behalf of the former Soft Boys, and I hope that the quality compensates in some way for the delay.

Best wishes from the old country,


Unfortunately, the LP that I bought does not match the description above. First of all, the LP was cut in mono. To my knowledge there has never been a mono mix of this album (it was after all recorded in 1980, not 1967), and all previous issues of the album, including the original pressing on Armageddon Records (ARM 1), are in stereo. Second, the version of "Old Pervert" on the YepRoc reissue LP is the not the original one described in the email, but rather the "disco" version common to all previous Underwater Moonlight reissues.

I have no idea what happened here, and I won't speculate, but it is easy to conclude something went very wrong with this reissue based on this evidence alone. I attempted to contact YepRoc for answers to some of the questions raised by these problems, but received no response. The relevant portions of my email to YepRoc are reproduced below:

Back in November of 2010 I posted an item on my blog, Flowering Toilet, promoting YepRoc's then upcoming LP reissue of The Soft Boys' Underwater Moonlight:

After having purchased the LP, I feel the need to post a follow up, because it appears to me that the version of the LP that YepRoc has released does not match the description that Robyn offered, and that I passed along to my readers in good faith.

There are two major issues with the YepRoc LP reissue that I regard as extremely problematic. First, and most importantly, the LP is in mono, not stereo. Given that Underwater Moonlight has never been previously issued in a mono version (and the fact that it was recorded in 1980, not 1967) I have to assume that this is the result of a mistake. Second, the version of "Old Pervert" is the "disco" version of the song that is common to previous reissues (Glass Fish, Ryko, Matador), not the original version of the song that appeared on the Armageddon LP in 1980, and that Robyn indicated would appear on the YepRoc LP.

I am hoping you will be able to answer the following questions so that I can pass along the answers to my readers:

1) Why is the LP in mono, not stereo?
2) Why does the "disco" version of "Old Pervert" appear on the YepRoc reissued LP instead of the original LP version as promised by Robyn in his email to YepRoc customers?
3) Was the LP, as released by YepRoc, in fact cut from the production master that had been in the possession of Morris Windsor and is mentioned in Robyn's email, and was this the version that Morris pronounced "very good"?
4) Does YepRoc consider the LP, as released, acceptable? If not, what steps, if any, are being taken to rectify the situation?

I am reluctant to post anything on my blog that is either critical of Robyn, The Soft Boys or YepRoc. However, given that I passed along what appears to be inaccurate information to my readers, I feel duty-bound to follow up on my previous post, and I cannot in good conscience not mention these issues in doing so. I wanted to reach out to YepRoc for information before addressing the issue in the interest of fairness and in the hopes that I can pass along accurate information this time. ...


I sent this email to multiple contacts at YepRoc on September 8, 2011, but have not, as yet, received a reply.

I would like to apologize to any of my readers who may have bought this reissue on the basis of the information I passed along. Again, I did so in good faith and with no intent to deceive. I am as disappointed as anyone that this reissue did not live up to YepRoc's promises. I would also like to apologize for not posting an update sooner, but it was my sincere hope that these issues would be resolved by YepRoc, making any complaints about this reissue unnecessary.
Posted by Pete Bilderback at 11:56 AM 5 comments: